Going, Going, GONE (to my house)

This is a post about the perils of bidding!

The fun and friendly Cheshire County Historical Society Auction was last Friday and it was indeed filled with terrific auction items.

There was the live auction where I won a piece of beautiful locally made pottery.

There were also the bidding sheets, of items not in the live auction, where I won 4 blue flow plates, a 1920’s scale, and wee irons. 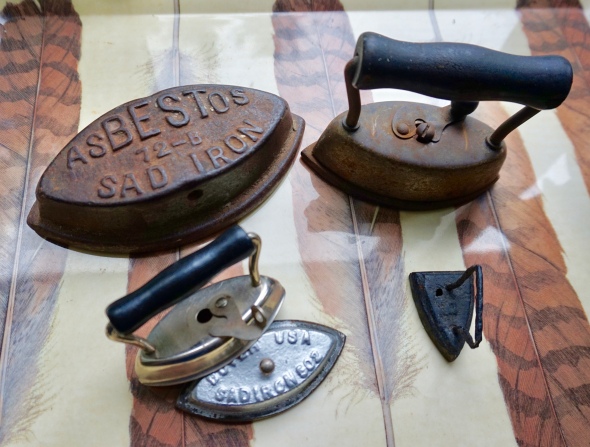 Sad, but not toxic!

Of course this is the kind of accident for which I am partly to blame.  Rather like tapping a wasps nest, you don’t mean to be stung but it happens.

I was first bidder so I was sure “Someone else will bid higher!” Oh how many times have I said that! I will admit I did not win the beautiful print old print, nor the locally made milk bottle.

First let’s NOT talk about the 1920’s type scale.  It’s white, and I thought “That would look cool in my bathroom!”  Then I tried to lift it.  There was also a boat anchor in the auction, and I think the winner of that item should have bought the scale instead.  I’m going to try to barter with it.  A friend that owns a vintage shop will give me store credit for items I bring to her.

Two I won, and one I bought as I was sure I’d never win the bidding.

The second items I do not consider a mistake.  I fell in love with the wee irons so much that I bought a small one before the auction. Now I have three items and three of anything is a collection!

These are SAD irons.  Unlike what the Franklin Pierce homestead tour guide tells you, it is not because you are SAD when you use it.  Ironing is a hard chore, but then we would also have SAD vacuum cleaners and SAD washing machines and SAD cast iron skillets.  “Sad” is an old English term for solid.  It means this iron is built well.

Not sure why the small sizes.  Salesman samples? Toys?

I also own part of a full size Sad Iron.  It has ASBESTOS written on it.  Thankfully the asbestos was in the handle of the iron, and the top piece is missing with mine.  The asbestos meant you could handle the hot iron.  Also the top part was detachable, so that multiple iron bottoms could be kept warming at the fire.

So pretty who could resist? Well everyone but myself….

Then there are the beautiful, perhaps unique, blue flow plates I bought.  I showed them to my husband the night of the auction and he said “They wouldn’t fit in our house anywhere, we don’t have any blue walls.”  I have to admit that green and cream are the current color scheme of the walls. 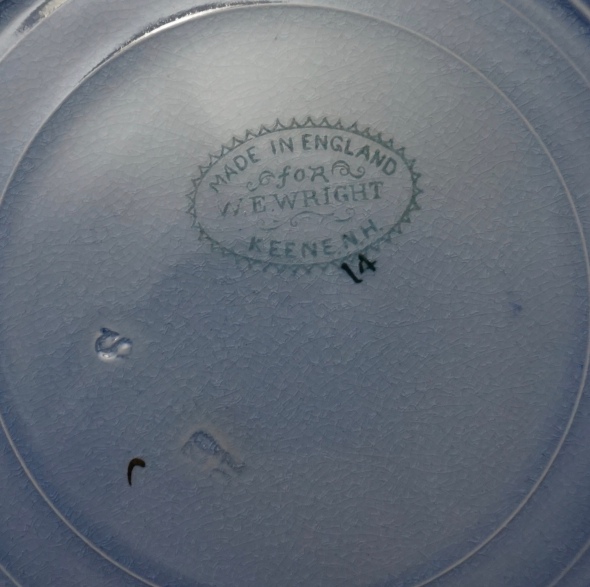 Still, who wouldn’t bid on mystery plates made in England for a local Keene store? They are in perfect shape.  Throw in the links that border the plates with the names of states and the hand detail work, and these are the most beautiful plates I’ve ever owned.

I won them and I am happy.  My husband and I do like our very small collection of things made locally, and these were at least sold locally.  No clue the story behind them, but they appear to have been made for a special occasion. 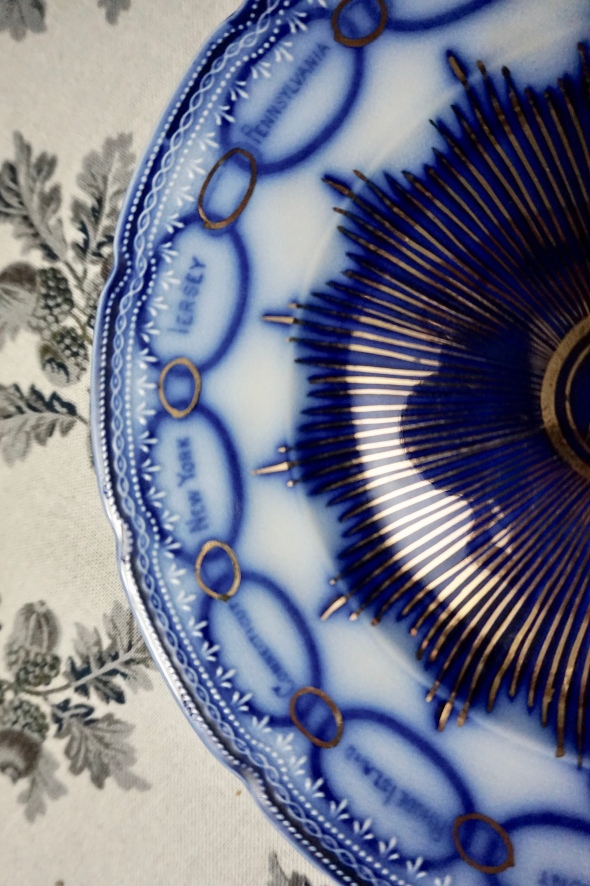 Why some of the states and the gold links?

They now sit in my china cabinet looking amazing.  Maybe someday I’ll find out their story, or maybe one day they’ll end up in a garage sale.  Who knows?  We are supposed to be downsizing.  We did downsize.  Now, we’re just collecting Cheshire County items.  Sometimes. 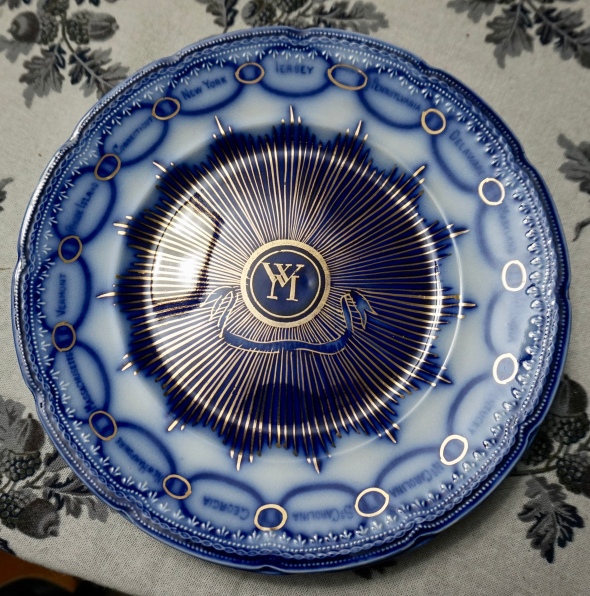 I paid very little for these four plates. I wish photographs could do justice to how beautiful they are.  Maybe one day I will know the answer to the mystery of what all this symbolizes.

So my children can complain all they want.

I’m already looking forward to next year.  I’ll be a bit more careful, as it seems everyone else is also downsizing!  But that doesn’t mean I’ll be able to resist just a few opening bids.

It was a terrific weekend… »
« Historical Society AUCTION! Everything including a buffalo helmet.

One thought on “Going, Going, GONE (to my house)”