Even as a young child, I was intrigued with the story of the enigma machine.  The enigma machine was the German code machine famous from WWII.  The Germans had such faith in this truly superb machine, that they refused to even consider the code generated by these machines could be broken.  The enigma machine was a brilliant design, but not a perfect design. German propaganda and culture of the time encouraged a belief that German engineering, culture and intellect was superior to other “softer” nations.  This extended to the enigma machine, truly the most sophisticated code machine of the time, but one capable of being broken.  The Allies knew they needed an enigma machine, once they had one and they had to break the code.  Polish code breakers had ,since before World War II started, been deciphering codes from a simplified version of the enigma machine.  Their sharing of this knowledge with the British was invaluable to the British code breaking efforts.

I remember seeing a movie as a teenager, the title escapes me, but not the story of how the code breakers in the UK had to be careful what to do with the information they gathered.  Thousands of citizens were allowed to die, because the code breakers knew which cities were scheduled to be bombed.  Coventry was one of the cities that suffered most from the code breakers inability to evacuate citizens. Any hint that the enigma codes were being read would endanger the outcome of the war.

I knew there few enigma machines had survived the war.  I knew Mick Jagger owned one. 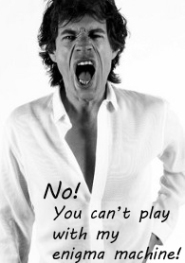 I do not run in the same crowd as Mick, though a fellow teacher’s brother was the Stones tour director.  She could get me a free tour jacket, but not a visit with Mick’s enigma machine.  I would also like to assure everyone as much as I would love my own enigma machine, I was not responsible for the theft of a machine from Benchley Park, which is now  a museum dedicated to the British code breakers of WWII.

I was lucky enough to be invited to James Randi’s birthday party a few years ago.  That deserves it’s own blog. It was truly an honor to be invited, and I met many of my skeptic heroes in a relaxed and happy environment of celebration for everyone’s favorite skeptic, The Amazing Randi.

Celebrities of the Skeptic World, but the real stars were a pair of machines I’d always wanted to meet!

The party was at a wonderful restaurant.  I was informed after dinner we were all in for a special treat.  After dessert and wonderful tributes to Randi, everyone was invited into the personal library of our host for the evening.  While it was full of treasures, I had eyes only for the two enigma machines.  Many of the guests did not even know what an enigma machine was.  I however was more than happy to explain what the machines were, while drooling over them.

While there were many books and artifacts worth far more than the enigma machines, for me the chance to see these machines in person was priceless.  The experience was just one of many wonderful opportunities I’ve had because I’m involved in the Skeptic community.

I was even allowed to touch the enigma machines, our host kept joking “It’s all insured!”

I have to say my hands were trembling, it was like meeting a celebrity.  There were many well known humans attending the party, but the real stars were these machines! 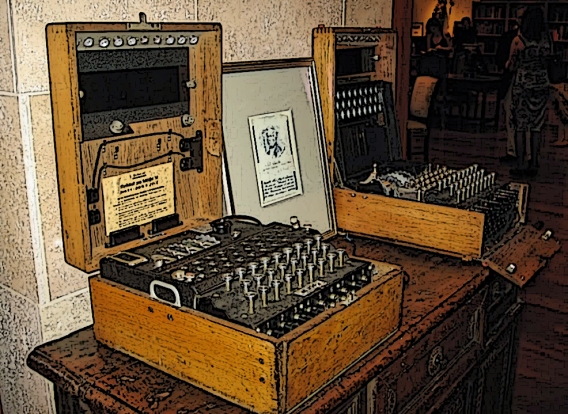 If these machines could talk…

That night, everyone gravitated toward some item or book that meant something to them. Richard Dawkins seemed to be greatly enjoying a first edition of “The Wind in the Willows”.  It was interesting how the children’s books drew so many of us.  I held a copy of “Alice in Wonderland” that had been owned by the inspiration for the character Alice, Alice Liddell.

Even Richard Dawkins could not resist the children’s books.

Still, it was the enigma machines that were my favorite, and I was glad to have a chance to study them up close, in a way no museum would ever let me.  Mick Jagger can rest easy, I won’t need to bother him to see the machine of my dreams.

How Pompeii led to Darwin’s Theory of Evolution ( or don’t step on that butterfly!) »
« Previous Post