How Pompeii led to Darwin’s Theory of Evolution ( or don’t step on that butterfly!)

While science has proven over and over the truth and validity of the Theory of Evolution (Creationists, please look up the scientific meaning of the word “theory”, thank you) Charles Darwin might not have a day to honor him if it had not been for the eruption of a volcano.

Darwin doll approves of my green jasperware pieces. They allowed him to THINK rather than WORK.

Let’s start at the beginning of this chain of events that shaped science forever.

Still no one got excited about Pompeii, or even remembered it, until it was found again in 1748.  Excavations revealed the site visited by tourists today, almost.  Sadly many exposed murals have been almost destroyed from exposure so the modern tourists sees far less than the tourist of the 1700’s.   A town almost caught sleeping, a picture captured of life as it was in Roman times, was a sensation.  There were tourists, and stories in all the newspapers as find after find came to light.

Naughty bits, like this mural from Pompeii, didn’t make it onto the Wedgewood plates. However, they might have sold even better if they had!

What do tourists, and those that are reading about Pompeii want?  Anything to do with Roman times.  I can only relate it to perhaps the opening of King Tut’s tomb, and the resulting fascination with all things Egyptian.

Enter a new pottery company in 1759, Wedgewood.  They are doing alright, but they really need something with popular appeal to put on their various vases, plates and especially their jasperware, which was a beautiful blue with white relief figures on it.  You have to remember, it took the archaeologists (yes it’s spelled that way, I have been spelling it archeologist for YEARS, damn you spell check) a long time to dig out, and fads lasted longer in those days.  So the whole Pompeii thing was still pretty popular.  Josiah Wedgewood, who founded Wedgewood ,the business, with the help of his spouse, Sarah Wedgewood (a relative, which while common Darwin later contemplated might not be a good thing.  The family might have suffered from inbreeding issues) thought this Pompeii thing might be just the ticket. 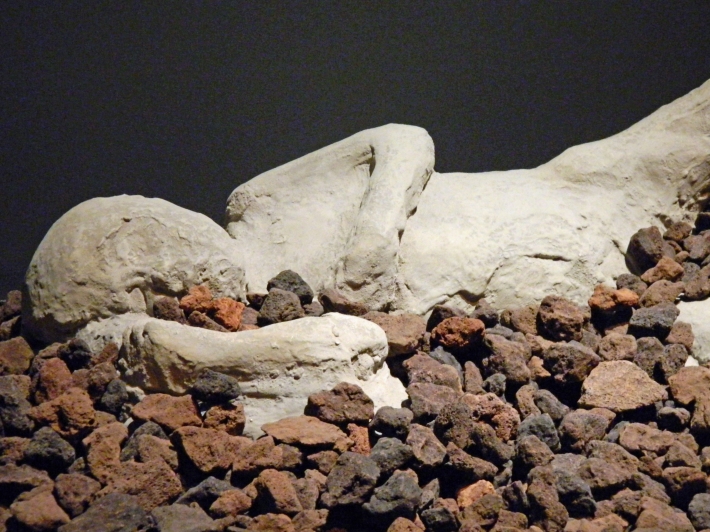 Perhaps he would have died happier had he known his death would one day advance science?

So he put the people of Pompeii all over everything, and they were exceedingly popular.

This lead of course to a lot of profit.  While Sarah had brought a lot of money to the family with her dowry, if the pottery had been a flop her dowry might also have been gone.  Instead the Wedgewood family grew and prospered (and intermarried, all the better to keep the money in the family, a common thought at the time).

One of the daughters of Sarah and Josiah was Susannah.  She met a nice relative named Charles Darwin.  There was lots of Wedgewood money around and Charles, while he worked hard for all of his life thinking and doing science, was able to do so because he came from a family with the means to allow him a life of following his own pursuits.  We owe a great debt to gentlemen scientists, such as Benjamin Franklin and Henry De la Beche, who used their personal passion for science to advance it.

Meanwhile, I have only the green jasperware pieces, because I like it far more than the traditional  jasperware pale blue.  Still, scattered across the plate are maidens, perhaps from Pompeii, little knowing what their fates will be.

So from a volcano to a popular archaeological dig to pottery to wealth for a family to Evolution is a pretty far stretch.  However, much like Ray Bradbury’s dead butterfly, you never know just what might have happened had Vesuvius not erupted and buried Pompeii so long ago.  At least it’s fun to speculate about on Darwin Day!

More naughty bits that I really do think might have had at least a limited market.