Gen.Petraeus, my officer husband, and the role of honesty and honor

I perhaps wasn’t as shocked as most people at the news Gen. David Petraeus  was having an affair allegedly with journalist, and reserve officer, Paula Broadwell.  My husband, a retired Navy officer, was with me when Broadwell was interviewed by John Stewart on ‘The Daily Show.”  She was speaking about her newly published biography of the general which has been described elsewhere as, “Fan Fiction”.  My husband was disturbed by the level of access she had been given.  It just didn’t “sound right” to him.  It didn’t matter that she was a fellow officer and had military and intelligence experience, Mark kept saying “This is wrong, you don’t grant access like that to anyone.  She was with him for a year, in a civilian role.”  His conclusion was she was intimately involved with him.

We jokingly compared it to Katie Holmes and Tom Cruise.  “I’ll bet she had a post of the general up on her bedroom wall as she was growing up!”

Still, I wasn’t convinced.  I believed, and still believe, men and women can be friends.  I have many close friends that are men, mainly people I’ve met in the skeptic movement that I truly feel are brothers.  Also, as a women skeptic, I’ve had to often reach out to the “old white men” of the movement as they have the knowledge and experience I need to do my skeptic work well.

I also am friends with many younger skeptic men, that I consider sons or younger brothers.  This has never been an issue for me or my husband, I get mentoring and I also hope that I serve as a good mentor.  However, it might help that I look like Holly Petaeus more than Paula Broadwell.  I know skeptic women will be up in arms about that comment.  I think it’s a fact that beautiful young women in the skeptic movement probably will hit on a lot more than I ever will be!  But I also think that men need to get over it, and the women also.  There are many friendships between men and women that are platonic, important and successful.

I won’t go into the “why not?” part of this affair too much.  People often don’t understand me when I say “It’s not the affair, it’s the dishonestly.”  If these two people did indeed agree to have an affair, that’s fine.  Consenting adults.  But they also chose to lie to their spouses.  There’s the rub for me.  That’s why it’s called “Cheating”.  It isn’t the sex, it’s the lying.

As a young officer’s wife I attended many meetings, and know my husband was informed many times, that our behavior had a direct impact on my husband’s career.  One husband with a wife that was pulled over for too many DWI’s was told to get her straightened out or leave the military. 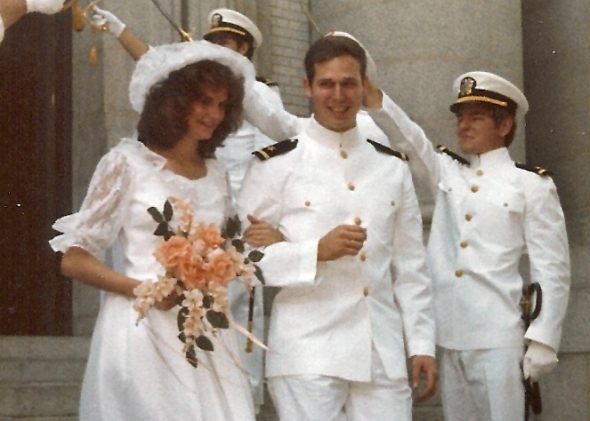 An officer and a gentleman

They Navy was direct that an affair, with the possibility for blackmail, was not to be tolerated.  Whenever an officer was up for a new level of top secret clearance, the friends and co workers of that officer were interviewed. I was interviewed, with my consent,  about a fellow officer.  I was friends with his wife.  I was asked directly if I had an suspicions about his fidelity to his wife, even if it were only a rumor of cheating.  I answered the questions put to me honestly, because I fully felt if I fudged an answer my own husband’s life could be in danger one day.  I wanted only the most trustworthy in those jobs demanding the utmost secrecy.

It seems silly to outsiders, but especially during the Cold War, wives were informed again and again to not even mention deployment dates on the phone and not even to inform our relatives of anything that might in the slightest way be secret.  I later had to speak to younger officer’s wives about the need for secrecy.  I stressed that even if you thought “well the Russians must know all about that” what you say could be confirmation to the enemy.  There was a real “code of conduct” for the entire military family to follow.

I know that my husband graduated from the Naval Academy during the same Cold War time as Petaeus  graduated from West Point.  Mark graduated in the top part of his class, but was no star such as Petaeus.  Mark was more geek than star athlete.  But, Mark was, and is, the most honest man I’ve ever met.  He also learned to take care of his “men” (and women).

Today, even though he is in the private sector, he still shows a dedication to those he works with.   He asks about sick wives, worries about their kids, and makes sure others cover when someone is having a crisis.  He’s tough, but he’s also well respected and I find it touching the respect and fondness the people he directs have for him.  He’s also a very good team player.  He loves his job of flying around the world interacting with others, and “getting things done”.

Sorry, I’m writing my own “fan fiction” about my husband!  (Only it’s all true)

The honesty he has, and his loyalty and dedication to any job, is a direct reflection of what he learned at the academy.  Gen. Patraeus didn’t have to resign.  He could have quietly ended it with Broadwell and moved on with his life. I’m sure most people close to him knew of the affair and that there were no hints of this shows the loyalty those close to him had.  I hope at least one came to him and said “Do you know what you are doing?”

If he had divorced his wife, or honestly said to her “You know, I would like to have a relationship with this woman, and yet also stay married to  you because we do love each other”, or just simply handled it honestly, he would still have his job.

I can see the same dedication my husband has in Pataeus’s decision to resign.  While others say “Well it was just an affair!” they don’t understand how for my husband’s generation graduating from their respective academies, this was a matter of honor.  He broke the rules, he made a mistake, and now he has to pay for it.  This was his decision to inflict this punishment on himself, as a man of honor he had to.

Being married for a very LONG time, I get some teasing from my friends.  How do I know Mark isn’t out there with a string of girlfriends as he travels?  I simply tell them that first off, it’s none of their business, and second, we trust each other.  We have to, or the marriage doesn’t work.

I hope that the Gen.Petaeus and his wife can work things out and keep a marriage that seems to have worked well for both of them for so long.  As for Broadwell, I hope for the sake of her two sons, to say nothing of a very supportive husband that must have had a great role in raising their 2 sons while she was in Afghanistan, that she also can work things out.  Mistakes, can be learning experiences.  Sometimes, what you learn is that the person you are with is someone you truly love after all.