Thank you to Claus Larsen again for his reviews of Cosmos.
The scope of Cosmos 2014 is the biggest imaginable, and in episode 4,
the host, astrophysicist Neil deGrasse Tyson, takes on the complex and
perplexing issues of space, time, gravity and one of the most dramatic
of phenomena, black holes.As before, we open with the story of an important scientific discoverer,
in this case William Herschel. He found that stars are suns, even our
own sun. The light we see, on our planet, from the stars, come so far
away, that it takes years, centuries, millennia, eons, if you like, to
reach us. Those furthest away are dead by the time their light reaches
us. The telescope is a time machine, looking back in time. Our moon is
one light second away, our sun 8 minutes. If the sun exploded right now,
we would only know in 8 minutes from now. If that wasn’t perplexing
enough, when the sun rises above the horizon, it isn’t really there. We
only see the sunlight bended by the atmosphere. And the horizon isn’t
even there! In this episode, we are in for an exhilarating ride here,
and we have only just begun.

As we move further out in space, we meet Neptune, about four light hours
away. Light hours turn into light years, the distance light travels in a
year. The closest star, Proxima Centauri, is 4 light years, taking
Voyager 80000 years to reach it. The Crab Nebula is the result of a star
collapse, a supernova. Its light has taken 6500 years to reach us, which
is how long some people still believe is the age of the entire universe.
This example of ignorance is scathingly exposed as nonsense, by showing
that we couldn’t see anything further away than the Crab Nebula, if it
were true. The mere fact that we can see the universe dispels the myth
of a very young universe. In the word of the host:

“To believe in a universe as young as six or seven
thousand years old, is to extinguish the light from most of the galaxy.
Not to mention the light from all the hundred billion other galaxies in
the observable universe.”The light coming from the center of our galaxy is 30000 years old, when
our ancestors first drew images on cave walls. We see the Sombrero
galaxy as it was when our ancestors were living in trees. Even that
galaxy is still in our own cosmic backyard. The Coma Cluster, containing
more than 1000 galaxies, is on average 320 million light years away,
when the known continents on Earth were not yet formed, and life had
just begun to crawl on land. Still, a blink of an eye, compared to the
13.4 billion year old light, coming from the very first generation of
stars, when the Earth was far from existence. Before that, before the
Big Bang? We don’t know – but we are working on it. 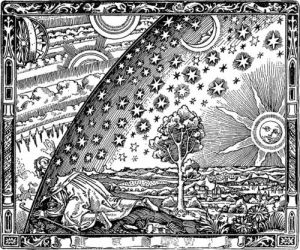 Wherever you are, you will always see yourself as being in the center of the universe, but that is merely an illusion. There is no center of the universe. The cosmic horizon is no more real than the horizon at sea. It only seems like there is a center, because the speed of light is finite.

The evolution of the universe, from matter to stars, which exploded,
threw out the heavier elements needed for planets, and life itself.
Space and time were created, as well as gravity. Newton could explain
the movement of the planets, but it was Herschel who saw that Newton’s
laws of gravity also explained the stars in the universe, especially
through the discovery of binary stars, dancing around each other. In the
1800s, Michael Faraday discovered fields of force, explaining what
Newton never could understand: How gravity worked. Later, James Clerk
Maxwell transformed the ideas into mathematical laws, and discovered
that the speed of gravity is the same as the speed as light. This, in
turn, enabled Albert Einstein to complete his theories of relativity.

Those theories always present a problem, because they seem contrary to
what we are used to experience. When we measure speed on Earth, we
always do it by comparing the object’s speed to something that is
standing still. The problem in space is that there is no center, nothing
that doesn’t move. This means that, even if we move at 10 km/h on a
bicycle, we are also moving as fast as the Earth spins, as fast as the
Earth revolves around the sun, as fast as the sun revolves with our
galaxy, and as fast as our galaxy moves in space. 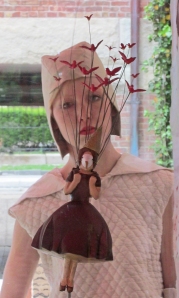 Einstein pondered what would happen, if he traveled with, or close to, the speed of light. He discovered that reality changed dramatically, the closer you got to the speed of light. Since the speed of light is constant, and the fastest any object can travel is close to, but not at,
the speed of light itself, it means that light traveling from an object moves at 300000 km/s, even if the object itself is moving. Your speed
does not add to the speed of the light from your motorcycle. The light barrier is a fundamental law of nature. And those are unbreakable.This brings us to the subject of dark stars, or, as we know them today,
black holes. Originally envisioned by Herschel’s friend, John Mitchell,
and another of the relatively unsung scientific heroes that the show is
keen to present to us, black holes are stars so massive, that light
itself cannot escape their gravitational grip. Mitchell imagined, that
if a star was in orbit about something that couldn’t be seen, that
something would be a black hole. He was right.While Tyson clearly delights in communicating all aspects of science, he
cannot hide his pure joy when he explains black holes, one of his
favorite subjects. Using his home town of New York as a background, we
learn about what happens when gravity changes: If it disappears, things
in motion begin to fly. If it gets stronger, objects can collapse from
their own mass. Fortunately, not all stars can become black holes, only
the biggest of them can. Our own sun is way too small to ever become a
black hole. And there won’t be a black hole zipping by us, to gobble us
up. But if we do go near one of them, strange things begin to happen. We
can spot black holes by looking just outside the visible part of the
electromagnetic spectrum, where X-rays reside. We find binary star
systems, where one star becomes a black hole, and the other is slowly
sucked into the first.

Where does all that matter go? We don’t know – yet. But all the galaxies
we have searched have a black hole. The center of our own galaxy is no
exception. Through the most stunningly dramatic computer simulations so
far in Cosmos 2014, we discover that spacetime itself is stretched, when
we travel closer to the black hole. What happens then? We don’t know
that either. We will have to wait for the next Einstein. 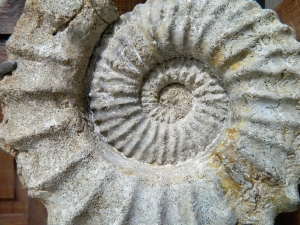 But, like Einstein, Herschel, and Mitchell, we can do thought
experiments. Since time and space are just two aspects of the same thing, spacetime, we could be going through wormholes, where matter was
spewed into the universe again, or perhaps even a whole different one. The extreme gravity inside a black hole is similar to what happened at the Big Bang, so perhaps our universe came to be through a black hole?The one thing that Cosmos does not shy away from, is mind-boggling
theories that just might be true. Only time, and the pursuit of science,
will tell which theories are true, and which are false. Who will these
scientists be? We finish this episode with Tyson’s 1975 meeting with
Carl Sagan, host of the first Cosmos series. The message is as clear as
it is promising: If some kid from New York City can become a great
scientist, so can you.

Guest Post – Is the Modern Skeptical Movement Actually Necessary? »
« When airplanes go missing in the ocean…

One thought on “Episode 4 review- Cosmos”