Build or Die Curse! (or the carpenter’s cushy job)

Almost all skeptics , and those that have heard of the Winchester Mystery House, the home of Sara Winchester in San Jose, California.  While many of the mysteries attributed to the house, from ghosts to an evil Native American curse, are less history and more inspiration from later promoters of the house, one thing is true, the house is very unusual. 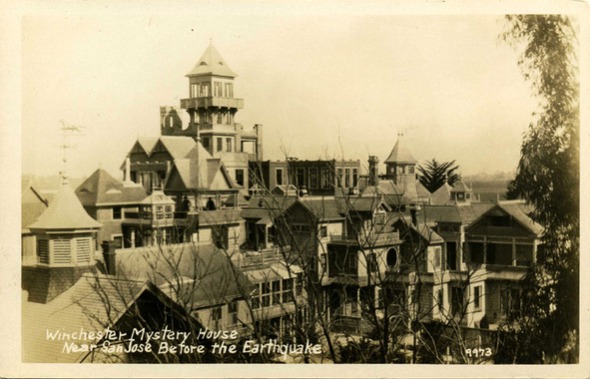 The house was much larger than it is today. Certainly some carpenters made a good living catering to Sara’s architectural whims.

Sara Winchester had an interest in Spiritualism, but this was not uncommon for the period.  During an era where children often never made it to adulthood and medicine was helpless in the face of many diseases, such as the TB that killed Sara’s husband, Spiritualism was a solace to many suggestible people.  Since science still hasn’t cured death, even today the clients of any psychic are those wishing to communicate with their dead loved ones.  It does not mean Sara Winchester felt she was cursed or surrounded by ghosts. No where can I find a first hand account of Sara saying she felt she had to “build or die”.

Even so, it is stated now as fact, that nonstop the building, which includes stairs to “no where” and over 160 rooms, can be attributed to Sara’s fear that if she ever finished the house, she would die. The curse, supposedly from Native Americans angry about the Winchester guns that killed so many of their tribes, seems racially offensive and also unsubstantiated.   As woman that had already suffered much, including the early death of her only child, I wonder what Sara was  afraid could happen.

Some of the supposedly mysterious stairways, which are of a smaller rise than the standard, can be explained as Sara had arthritis and these stairs were more comfortable for her to use.

Stairs at a shallow angle allow a small woman suffering from arthritis comfort…or was she just CRAZY?

Also, eccentricity, more than fear, could be why Sara enjoyed always having a home under construction.  She built on a whim, often having new construction torn out and redone if she didn’t like it.  She could well afford this, and as a very shy woman that shunned publicity, she never explained just why she built and built.  However, countless writers since have been more than glad to speculate and pass on the rumor now reported as “fact” that she built to stay alive.

Sara Winchester and her building mania are famous, but I knew she was not the only person supposed to have suffered from the “build or die”.

I was born in Washington DC, and had heard as a child about Halcyon House.  Halcyon House was one of the most “haunted” homes in Washington DC (it still could be!).  One of the ghosts that supposedly still lives there is first owner , Benjamin Stoddard, the first Secretary of the Navy. Stoddard built Halcyon House, a modest brick home, in the Georgetown area.  He later lost most of his fortune, and died in poverty.  Perhaps he still roams the house, walking up and down and bemoaning his fate.  Or perhaps old home creak a lot.

Next the house is rumored to have been part of the Underground Railroad in the time period before the Civil War. Runaway slaves had to swim across the Potomac River to reach the refuge of the home. Many slaves drowned trying or died afterward in the dank and cold basement hiding area. Rumors of the crying of the ghosts of those hiding in the basement scared me as a child.  Workmen still swore to hear their dying gasps and anguished cries.

Ghosts from top to bottom, Halcyon House is full!

Halycon House most people would think had enough paranormal happenings,  between Stoddart, the cause of rappings, tappings and footsteps as he walks the halls worried at losing all his money, and the moans, groans, gasps and cries of the slaves. But then the  home was bought in the 20th century by Albert Clemons, a nephew of Mark Twain.  Things were about to get very interesting.

Albert Clemons was an eccentric, this is known.  If he was truly afraid if he stopped building or not is still only speculation.  What is known is that he began a project of building that totally changed this charming old home into a rabbit warren of rooms tacked on and a confusion of stairways.  Clemons built many apartments he rented out, but he was considered eccentric as he did not allow electricity in the apartments.  This could be interpreted as a fear of spirits that would not like electricity, or the fear many people had at that time of fire from what was a fairly new technology.

Clemons supposedly had buried mummies in the yard, and had an odd set of angels on one outside balcony.  He also used parts of the old St. Matthews church which was razed in his building projects.  This included beams, but recycling rather than the supernatural, could be the reason why Clemons decided to use parts of the old church.  However, as a child I was told it was all part of Clemons obsession with various religions and the paranormal.

Maybe the carpenter was just taking advantage of an eccentric old man. Build or die curses are fun “curses” but rarely the real explanation.

Clemons had a carpenter that lived with him full time to keep the construction projects going.  Clemons supposedly had the belief, as long as he kept building, he would never die.  However, despite an on site carpenter, Clemons died in 1938.  His ghost of course joined those already present at the house.  Strange tales abounded about those that slept in the house awakening to find they were levitating above their beds.

I have no clue if the current residents of Halcyon House have to deal with ghosts from across the generations .  “Are you Stoddart or Clemons?  Wait, this is the basement, must be a runaway slave.” or   “Sure hope I don’t levitate tonight, I paid a lot for that mattress I’d like to use it one night.”

I also suspect the carpenters in both these stories of “build or die”.  An eccentric older person is probably seen as easy prey for a carpenter willing to build no matter how bizarre the client.  Was Clemons carpenter simply building more rooms for renters, and living with him to save expenses?  An unskilled carpenter, or one just building for the sake of building, can find work for years with the right elderly client.

Both of these endless construction sites could have been a case of the “build or die” curse, or simply an eccentric being eccentric.

One thought on “Build or Die Curse! (or the carpenter’s cushy job)”