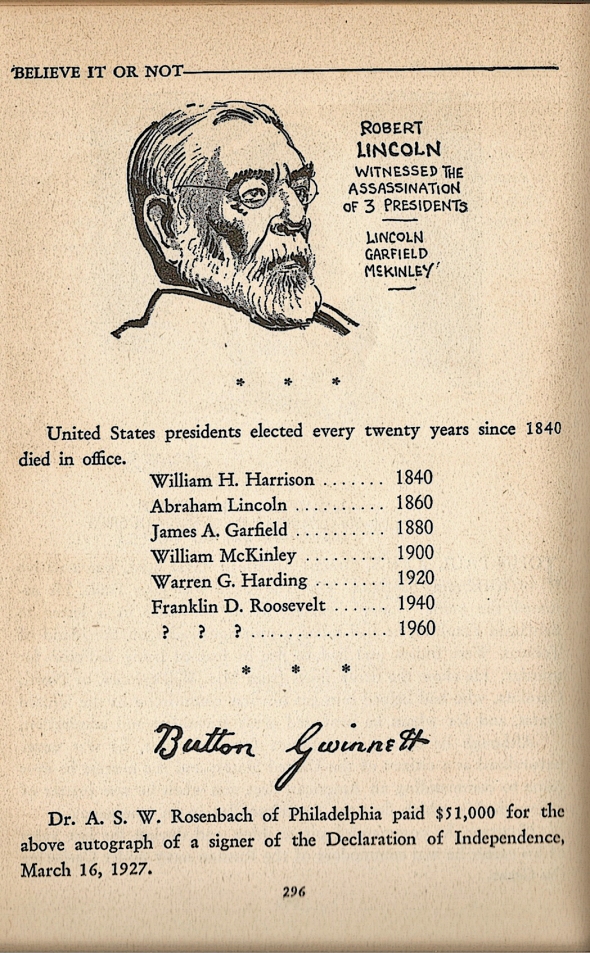 As a young child, stuck living in Nanticoke Maryland with my grandparents, I read a lot.  That is because our TV could only pick up one station, and it was very grainy.  At most growing up in the 60’s and 70’s there were perhaps 3 major stations to choose from.  Still, I scoured and read every book I could find in the house.

My grandmother had an old book that featured the cartoons and work of Robert Ripley.  The book was “Ripley’s Believe it of Not”.   I loved this book, and it’s one of the few things I’ve saved all these years.  I would spend hours, wondering at how Mr.Ripley found out all these impossible sounding things.  Indeed, reading it today as an adult, I do find “or not” instead of “believe” my reaction to a lot of the stories.

One story that I fully believed was known as the “President’s Curse”.  I had heard that every 20 years the president elected will die in office.  But, when I ran across this information in the book, I was shocked to see that there was a question mark for 1960.  Of course the book did not know who would die in office in 1960!  As a young child this was proof to me the curse was real.

When Reagan was elected, I had long ago forgotten about the curse.  The memory of it came back to me when he was shot.  Of course, he was cursed to die in office!  I didn’t really believe in the curse as an adult, but seeing that blank spot for 1960 had convinced me as a child.

I read later that Nancy Reagan, perhaps our most superstitious first lady, had felt her husband would die in office because of the 20 year curse.  Reagan lived through the shooting, and talk of the curse died out.

Now I never hear of a 20 year curse.  It’s forgotten, though some superstitious people claim the curse was only for 100 years, so Kennedy was the last destined to die in office.

I still remind myself how truly surprised, and convinced, I was by the simple question mark next to 1960.  To me, at a very young age, that was proof.  As a skeptic, this kind of weird “proof” is very hard to combat.  How do I explain the question mark?  I don’t.  It doesn’t need explaining anymore than Reagan not dying needs explaining.  A curse is only a curse for as long as it works.  If Reagan had died after the assassination attempt, we would all have expected Bush to die in office.  However, no one ever looked at Bush (elected in 2000) and said “oh boy that 20 year curse is going to get him, Reagan escaped by a fluke”.

Also I remember people telling me that President Kennedy’s secretary was named LINCOLN.  Which was of course, why he died.

Build or Die Curse! (or the carpenter’s cushy job) »
« GI Joe astronaut, the pool, and growing up with space heroes.

One thought on “The President’s Curse…every 20 years, DEATH!”