Flight 19, a museum and a mystery (not the one you are thinking of!)

One of my favorite mysteries is that of Flight 19.   The missing five Avenger planes, that flew out of Ft.Lauderdale and never returned, fascinated me since I was a small child and first read about the Bermuda Triangle. The mysterious radio transmissions, the rescue flight that blew up in mid-air, the lack of debris and the question of just where the pilots were (or thought they were), makes this mystery irresistible to me. 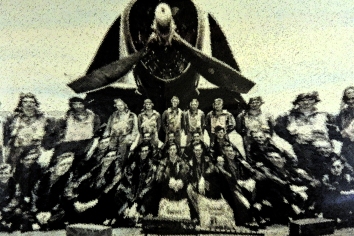 It’s really fun to read about how case by case ,or rather boat by plane, Kusche disproves Berlitz.  Yes, it’s actually fun.  The reader also gets a sense of the time Kusche must have put into his research.

“The Disappearance of Flight 19” is an excellent book, and in many ways a different book then the Kusche’s Bermuda Triangle book.  Kusche took the time to get to know the family of the flight leader and instructor of Flight 19, Capt. Charles Taylor.  The story of the Taylor family, and Charles, is integral to solving the mystery.  Who Charles was, his personality and background is crucial as he was the only one making the decisions that lead to the Avengers being lost.  In the military a commanding officers orders are followed, even if he is a weak leader. The conclusion of Kusche, and of myself after reading his book, is that Taylor was a tragically weak officer.

Also, the family, especially Taylor’s aunt and mother who raised him, were an important part of this story.  They spent years trying to clear Charles from any hint of blame. This helped cover up what Kusche  feels was the true cause of the Avenger loss, a weak and confused leader when a calm and confident leader was needed.

I was thrilled when I had a chance to visit the Naval Air Station Museum in Ft.Lauderdale.  I was visiting my friend, James Randi and his partner Deyvi, when on a whim I called the museum.  They were closed for renovations, but the person I talked with said she would gladly stay and let me in for an informal visit.

The museum is housed in one of the barracks the crewmen would have lived in.  It was a delight to see all the documents and WWII memorabilia cared for by the people that run the museum.  It’s an obvious labor of love.  The lovely woman that opened the museum just for myself and my husband (and I’m sorry I forgot her name) was delighted with my knowledge of Avengers and also Flight 19. 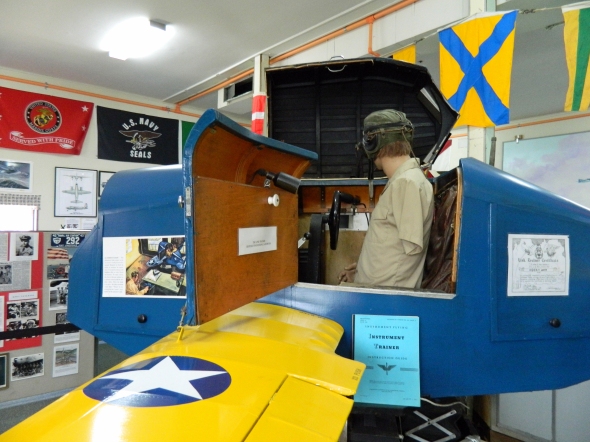 She opened the entire museum to me, whatever I wanted to see she went out of her way to show me.  She answered my questions, and together we hunted for things like a plotting board and the training manual showing how to ditch a plane.

The plotting board was of interest to me, as it was difficult to use and a factor in the confusion of the pilots as to where they were.  The manual showed how the passengers and pilot had just a few moments to ditch, and get the raft out of storage and cut away from the quickly sinking plane.  I can not imagine doing this at night in a heavy sea.  The fact that all five planes were lost is far less surprising than if any of the planes had ditched successfully and were later found. 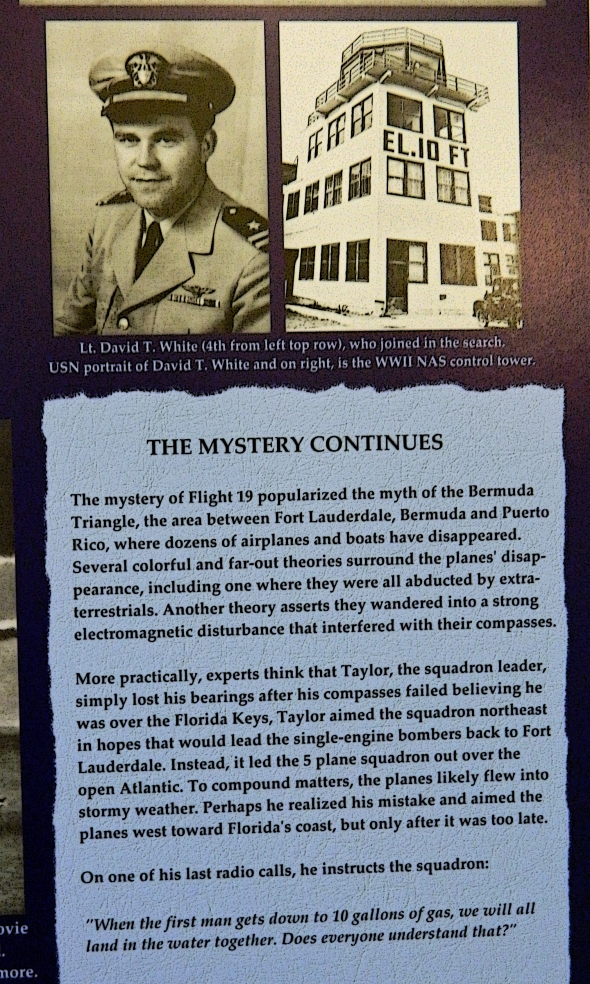 The official museum viewpoint, addressing the paranormal but stressing the truth.

I was happy that the museum, while addressing the paranormal explanations of the missing Avengers, took a skeptic viewpoint.  I enjoyed talking with my guide about how difficult it was for an Avenger to ditch at night in the sea, and how many other Avengers were lots over the years in the area.

Then, while I was feeling quite happy that the museum was not “cashing in” by pushing the paranormal like so many other museums, the guide showed me a typical room of a training pilot.  She smiled, turned to me and said “It’s haunted.”

The real mystery of the museum!

I did a double take, I was just talking rationally with this same woman about Flight 19, and she calmly tells me the barrack room is haunted.  I asked her how she knew and she said “Well, we often smell his cologne in here.”

I did not laugh.  Indeed she seemed quite fond of the ghost of some training pilot, now “retired” and looking over a wonderful museum.  People love ghosts, they serve as a sort of mascot, and so I was willing to go along with the ghost of the Naval Air Station Museum.  I had no way to disprove the ghost, and I’m not sure I wanted to.  The museum is a wonderful tribute to the men and women of the Naval Air Station.  The loss of Flight 19 is just an example of how dangerous their service to their country  could be.

If you have a chance, please visit the Naval Air Station Museum, and leave a nice donation!  The people behind this museum are truly welcoming and preserving the history of an Air Station that deserves to be known for more than Flight 19. 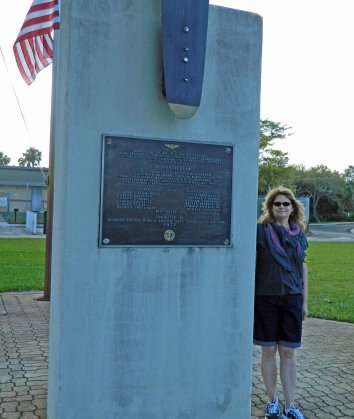 Cottingley Fairies, your gateway drug to skepticism (or Why I Love “Flim Flam”) »
« Believe it or not… magic squares!