Why Can’t I Use the N-Word? Especially if I’m White…….

Going to try my absolute damnedest to keep this simple while proving a short, valuable, lesson to as to why this answer is always NO.

You see boys & girls lately this has been a topic of much discussion about ownership, rights, social permission or however you want to phrase this topic for least the past decade. Well I’m here to tell you despite popular belief this is nothing new, but let’s pretend for a moment this is something that’s only come up in the past 17 years as I am only going to count from the year 2000.

Understand there is no comic, satirical, use of the N-word by anyone NON-BLACK with this exception of it being used as part of an actual history lesson in a proper setting. So for example any course that academically deals with works by a Mark Twain for example or in an actual course setting discussing the history, usage, implication of the word itself. That’s it. That’s all NON-BLACKS are permitted access too, and rightfully so….

Keep in mind the reason for these rather strict social protocols more or less is because of a few key reasons…..

1) From a social standpoint, Blacks are one of the most still oppressed groups in America let alone the planet. We literally are still having to have conversations about how not to appear as stereotypes to certain other groups, how to not look suspicious while doing mundane tasks like pumping gas, shopping while Black, even listening to loud music in your own car in a gas station and not getting shot, or going home and buying skittles and tea while minding your own damned business, how to dress, …..BUT be advised this does not mean just towards Whites, but Asians, Latino’s and Middle Eastern folk as well who tend….to have rather racist still and prejudicial views towards Black People. Between various caste systems, skin whitening products, slurs, and whole host of other issues.

2) From a historical standpoint…. It invariably and exclusively wherever said, however said, however spelled….always circles back to mean one group of people/persons, Black People. It really doesn’t matter who NON-BLACK is saying it or context really because just like Family Feud, the #1 answer as to who it refers to is Black People. Always have, Always will be. Unfortunately when it comes to this word in particular, and only this word….we have that #1 spot. And it will never be vacated unfortunately by any NON-BLACKS.

3) We own it, because it is ours. The whole reason why this is even a debate among Black people to begin with, is because there are two camps.

A) You have Black folks that want to use it to de-stigmatize the very word itself and the pain it has caused but the history of slavery/Jim Crow/Black Codes/Lynching/Redlining/and every other thing Black people have had too and still deal with since being here in 1619….

B) Black folks who feel it can never be de-stigmatized and are against all forms of it’s usage period and feel that it’s use by anyone, only keeps it alive and causes more harm than good. They feel rather strongly that burying the word and not using it can allow us as a group to heal and move forward from the trauma done to us and that every association with it from us being “stupid, lazy, thieves, thugs” etc etc etc is all summed up in this one word and does us zero favors…..

BUT this is a conversation and debate that unfortunately is our Schrodinger’s N-Word. Both are ultimately true and false at the same exact time and whether or not there is a correct answer in of itself, will play itself out with each successive Black generation and where it ultimately ends up will entirely depend on the generation at that time…..

There is not one, not one good reason why anyone NON-BLACK should use this word ever. Not one. You’ve no ownership to it, it does not affect you, and if used towards you it is always out of place. There is no way for you to tell a joke or use it as a greeting to anyone who is Black for it never to be a Pascal’s Gambit as to whether your usage of it is racist or friendly….

Keep in mind there are no passes, no permissions slips, no claims, no coming to the BBQ so to speak for you to ever use it.

The price of admission simply stated on usage of the N-word in any, again outside of strict academic context is Blackness itself, and truly more specific American Blackness at that…..and that’s another matter.

Think of a giant house, with you having the ability to go into any room you desire, but the N-word room, it is forbidden, your key card will not work here and you will not get one.

Sure, you might have one try and sneak you in that room, and you may get a peak behind that curtain…but you are only there to observe. Not to comment, not to give feedback, not to lead the discussion, not to give any thoughts or advice or counsel.

Black People can either use the N-word as they see fit OR not at all. It is their birthright by their Blackness and the future and legacy of racism that awaits them that allows them that access. It is dealing with all the racism you don’t see, don’t experience, don’t feel, don’t live, don’t have contend with, and countless conversation of things you have no clue regarding. It is the life experiences, shared history. It is you never having to worry if you are told “We think you’re just not a good fit for this company” means it’s racial OR you just don’t mesh well personality or skill wise. It is you never having to wonder how this cop feels about Black people when pulled over. It is you never having anyone question your intelligence before you’ve uttered a word. It is you never having to constantly be in control of all mannerism, gesture, diction and even the very levels of the tone of your voice so other’s, NON-BLACKS, don’t see you as a threat…..

The price of admission to the N-WORD is Blackness itself. It is non-negotiable, there are no substitutes, no coupons, no discounts. And truth be told many of you who desire and burn inside to want that freedom to use it so badly, if your wish were ever granted and you were made Black overnight for an extended period of time…..

Let’s just say I think many of you after 1 week would beg Lucifer himself to be changed back.

Please note italics are mine.  In case you don’t want to read the entire article, just take to heart the message…. 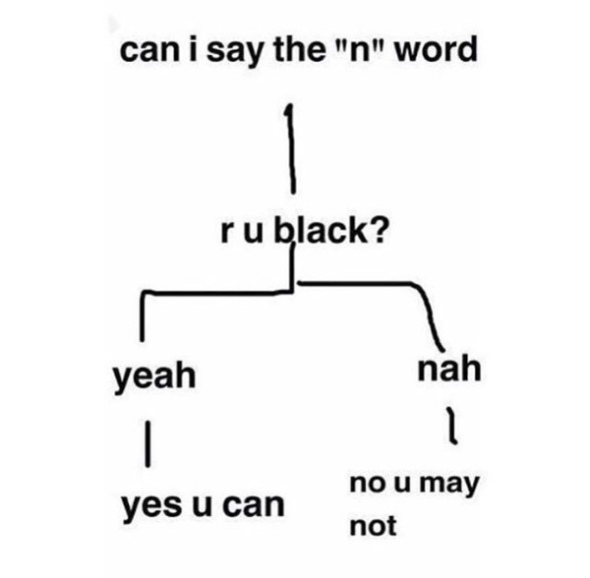 Thank you again to Andre Morell, for sharing his wisdom and insight on this blog.  As a white person, I would like to say that every white person is ,in some way, a racist.  Only by admitting our own imperfections, can we be open to learning what we need to do to be less racists.

So many white people claim “I’m not a racist.”

I think they mean “I don’t want to be racist.” That is a good thing.  But that doesn’t mean they still don’t cross the road when they see young Black teens coming down the sidewalk toward them.  It doesn’t mean they still don’t see a Black person running and think “Well I wonder what he did!” and a white person running and think “Well he’s working out.”

I don’t want to be racist.  That means, I have to be vigilant about the racism I’ve learned via the media and from relatives and teachers.  It means I never get to give myself a pass to say the N-word.  That is a birthright and can’t be earned by friendship and good behavior.

I don’t want to be racist.

I think that’s the best any white person in the USA can claim today.

Crappy art supplies, and why they work »
« Sasquatch and I are Quits!