When it looks like aliens, but it’s just Nature!

Ever since the earliest settlers came to New Hampshire, they would look to the mountains and see, a man.  Or rather the profile of a man.  The Old Man of the Mountains, or Indian Head, was a major tourist attraction and source of pride for New Hampshire until it fell down in  2003.

Neither the formation nor the falling caused by aliens.

The Old Man of the Mountains was first mentioned in literature in 1805.  No one at that time was familiar with reality television, so the rock formation was not credited to visiting aliens.

However, since the introduction of altering history via poorly researched, but best selling, books by authors such as Charles Berlitz, nature is rarely given credit alone for interesting rock formations.

Tabloids and best selling books, to say nothing of countless television shows assure us that Mars is basically an art studio for alien sculptors.  While common sense might suggest that like the Old Man of the Mountain, it’s just the phenomenon known as pareidolia, you can have your own television show if you just claim ALIENS.

precision sheets of ROCK but by nature? That’s not a theory that will get you a TV show.

However, it’s not just aliens anymore.  Bigfoot has joined the bizarre world of crafting rock in ways “Nature never could.”  Experts in both alien and Bigfoot rock sculpting assure the public that “nature doesn’t make sharp edges.”  A simple beginner geology book could assure these “experts” that nature is indeed full of every shape imaginable.

obviously a cut block for building a wall to keep Canadians out of the US?

A simple view of the amazing photographs of Wilson Bentley,a self educated farmer and photographer, is clear evidence nature can take about any shape we can imagine. The important thing about Bentley is that you don’t have to have a degree and be a trained scientist to contribute to our knowledge of nature.  All it takes is hard work and common sense.  Something sadly lacking in the average “reality” paranormal television show. 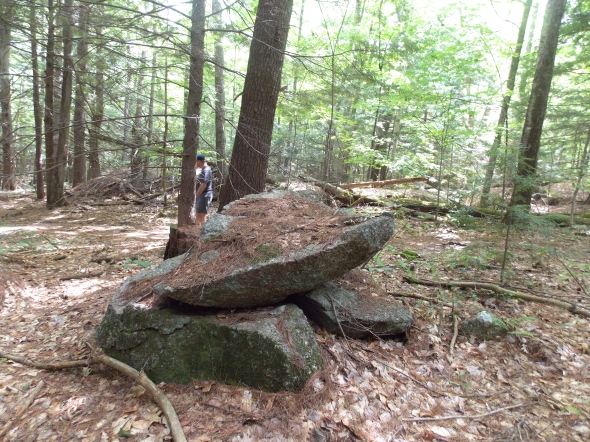 HOW DID THIS HAPPEN? it’s like an alien toddler was just tossing the rocks around.

A recent walk in the woods of New Hampshire showed many “unnatural” natural rock formations.  Sharp lines,and what appears to be sheets of granite, are these carved by alien or Bigfoot lasers?  The more I walk in the woods, the more I see either the aliens and/or Bigfoot have been very busy, or this is just what is known as the wonderful variety of nature.

well it could have been Bigfoot seen here in this image taken at the same time as the other photographs.

So what caused these “laser sharp straight cuts” and “edges sharpened as if by a hand”?

My advice to people that see aliens and UFOs flying around in the sky, is to join a good local astronomy group.  The more you look up at the night sky, the less of a mystery it is.

The same advice, take more walks in the woods, applies to those that believe nature is all rounded curves and anything different is directed by some form of intelligence.  Nah, it’s just geology! 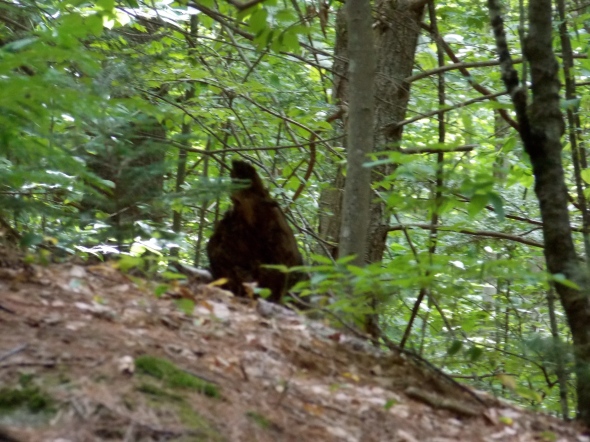 Bigfoot often looses his identity when an image is enlarged… bummer.

Getting it Right often means Getting it Wrong First »
« Lawn Ornaments, the history of our front yards