Geocache for Nyneve and me!

One of the most wonderful couples I know lost two children.

I don’t want to sound all “The Importance of Being Earnest” like, by saying “lost”, but there just isn’t a good word for the loss of a child.  The children of Candice and Paul never got to know the truly wonderful parents that were waiting with hearts full of love for them.

Candice and Paul have my admiration for the grace and bravery with which they have survived what I can only imagine.  .

Candice asks her friends to do “something new” on Nyneve’s birthday.  Last year Candice and Paul went on a hot balloon ride to honor her.  I decide this year I would also participate in the “Try something new challenge.”

The problem is I have two types of chronic arthritis, and couldn’t think what was new that was also safe!

That’s when I thought I would play it safe and do something old, but still fun, in her memory.  I made a geocache I call “Nyneve in Our Hearts”.  Little did I know, this would not be the “safe and easy” challenge I had imagined.

Geocaching is a free and fun way to find something hidden.  People hide a cache in the woods or city or wherever.  People find it using the free app, and sign a book included in the cache.  There may also be a small prize inside the cache container.

A heart shaped mushroom near the geocache

My cache “Nyneve in Our Hearts” has a children’s theme.  I decorated it with stickers and placed small Playmobile children inside as the prizes.  I also went to one of the favorite children destinations in the town of Keene NH, Robin Hood Park, to hide the cache.

This is where things became new and interesting.  Since I suffer from a chronic illness, I rarely go geocaching alone.  I have trouble with my joints and lack endurance and strength.  My plan was to just plant the cache near the playground at the park.

How hard can this be? Very hard!

I drove to the park and turned on the geocaching app, then discovered a lot of other people had beaten me to placing a cache in the area.  Still, I was determined it WOULD BE Robin Hood Park because of my own memories of taking my children there.  A geocache has to be a certain distance from other caches, so all I had to do was keep walking AWAY from the other caches listed.  Once I had about 600 feet I knew it would be safe to place the cache.

I rarely walk alone in the woods.  I rarely walk alone anywhere.  I’m highly allergic to bees, and my legs can just give out.  This I decided was the challenge.  What sort of honor was there in just placing a cache?  I checked to make sure I had my epi pen, walking stick, water bottle and a phone and began to walk away from geocaches.

The problem was, once I got 600 feet from one geocache, another would pop up on the screen.  While Robin Hood Park is a city park, it has many hiking trails that are very secluded and heavily wooded.  In other words, it’s not all easy hiking even for a children’s park.

Steeper than it looks….and slick …

I walked past three geocaches, and then my phone lost signal. This is very common in New Hampshire, so I just rebooted my phone after walking a bit more… and the phone decided to update all my apps.  I know now there is a way to stop this, but at the time I just knew I was being eaten by strange bugs, my glasses were steamed up from humidity and I wasn’t sure I could find my way back to the car without the phone GPS.

After what seemed a very long time, and a good meal for various insects, the geocache app came alive again.  It appeared I was near the end of my quest, there was still more trail and I had passed the last geocache in the park.  The only problem was  the trail at this point went UP.

I don’t do UP.  I do nice flat hiking or even better strolling inside an air conditioned store. I don’t do uneven, half washed out, hills.  Steep hills.  But if I wanted to place this cache in this park I had to do that hill.  For at least 354 feet.

I wiped off my glasses so I could see, held the phone up, and began the climb with the help of my stick.  The water bottle went fast.  Bees were attracted to the fear.  I just watched the count to 600 feet one foot at a time.  I also had to watch my feet as the trail was slick from recent rainstorms.  I even had to climb over two recently fallen trees in the trail pathway.

wee Playmobile pal helped me along the trail

When I finally went over the 600 mark I stopped to say “Now where would a three year old hide a geocache?”  I decide to not think like an adult. An adult might think under a rock or some brush was a good hiding spot. But a three year old would want someplace that looked like fairies or pixies might live there.  I didn’t see anything that was quite right, and so with extra effort hiked a bit more and found a fallen log that looked like a small family, animal or fairylike, might live there.

And so I placed the cache. 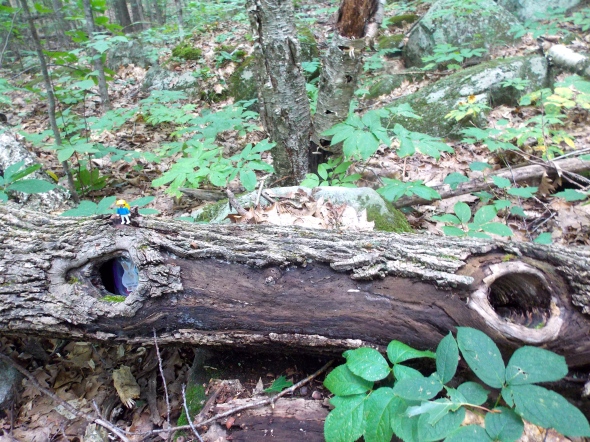 This spot was PERFECT!

Going back down I only had to reboot my phone once, and managed to stagger back to the car.  I turned on the AC and said to myself “I can’t believe I just did that!”  In my heart I thanked Candice for this challenge. 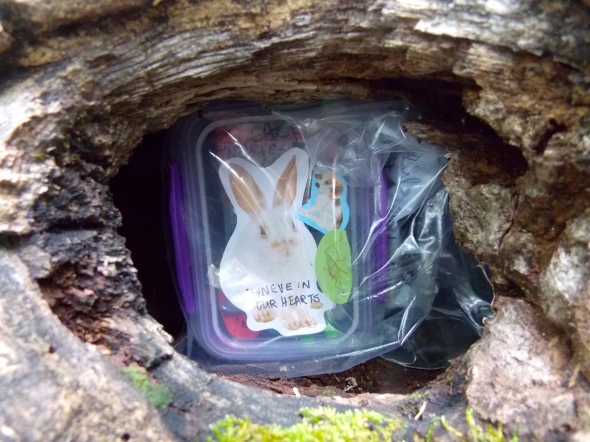 Just waiting to be found….

My fear of “What if…” was broken.  The WHAT IF I AM STUNG BY A BEE? (well I have my pen and a phone that sometimes works).  WHAT IF I FALL?  WHAT IF MY LEGS GIVE OUT? WHAT IF I CAN’T DO IT? That was all over ridden by my desire to do this for my friends.  I feel the difficulty of the task makes it a more fitting tribute to a family I admire so much.

I also have a lot more confidence in myself. 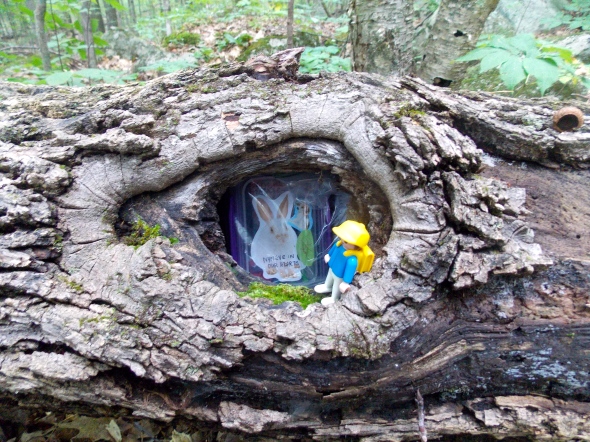 A fantasy home for the cache!

My hip and joints are reminding me “Oh boy did you do it!” but also, my family was surprised and a bit shocked I went out into the woods alone.  They know I love hiking and enjoy nothing more than the woods.  I had a wonderful time swatting at bugs (next time bug spray) and listening to birds and wondering what in the heck it was I just stepped in.  The world seemed very far away during that not so gentle walk.

I did have to rate the geocache as “child friendly” as I remember my own daughters at a young age clamoring up those same trails.  It is perhaps not arthritis friendly.  But I did it and I know I’m going to thinking far less of “WHAT IF” and more “WHY NOT TRY” in the future.  Thank you Candice and Paul for this gift.

Lawn Ornaments, the history of our front yards »
« GUESS THE MESS!