Scooby Doo, we love you… but not when you turn woo

Another guest post from Jim and I can’t thank him enough.  Many skeptics grew up on “Scooby Doo”.  They were the hippy ghost hunters, icons to a generation of skeptics that also grew up to ghost hunt, but being open minded that it might not be a ghost…. indeed it is usually some boring explanation.  I’ve ghost hunted some, and it has never been Uncle Jonas wanting to scare everyone off the farm as he knows there is oil on the property.

Scooby Doo, How Could You?!

(Writer’s note: This was originally written and posted to my blog at www.dimland.com in April 2010. I have made a few edits to fix a couple awkwardly worded passages; and to update a section to reflect my current attitude on global warming. At the time, I was more skeptical. Now I have learned more and I’ve come to accept the scientific consensus.).

The first topic of the very first edition of my internet radio show, Dimland Radio, (Saturday nights 11 Central on www.ztalkradaio.com) was ‘Scooby Doo, Where Are You!’ I chose it because it was the first kids’ program that encouraged a skeptical viewpoint. 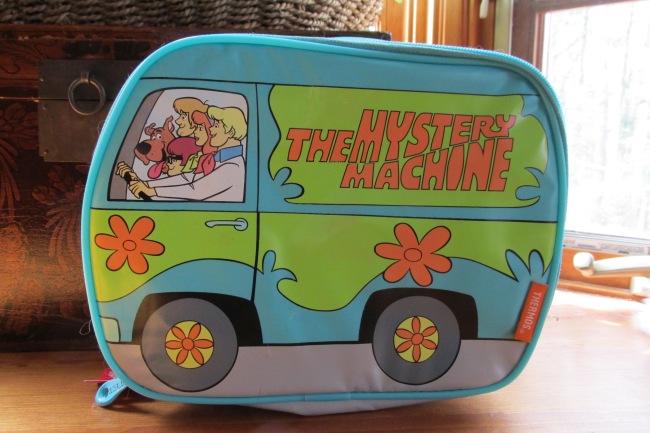 It debuted in September 1969, focusing on four kids and their dog roaming the countryside in their Mystery Machine van, looking for mysteries to solve. These intrepid trust-funders (there was never a hint of any of them ever having a job) would stumble upon a mystery of some apparent supernatural event and search for clues. Chased by ghosts, witches, werewolves and other assorted creeps, our heroes would always manage to reveal the truth and catch the bad guys.

The bad guys, as I’m sure you are aware, never turned out to be supernatural or paranormal. It was never an actual ghost or witch or werewolf. It was nearly always a person in a costume (there was the one episode where the creep was a robot run amok). It’s a wonder that the kids, especially Shaggy and Scooby, would continue to be scared of “g-g-g-ghosts!” After all the times the mystery turned out not to be supernatural, you’d think they would no longer believe in ghosts or the like.

Just the other day, when I got home from work, I joined my son in watching a Scooby Doo animated movie online via Netflix. (Oh, Netflix! How truly wonderful thou art!) The show was called ‘Scooby Doo! and the Witch’s Ghost’. It was produced in 1999, 30 years after the world was introduced to Scoob and the gang.

Oh, boy! Was I disappointed!

It was 1999 and the warning of global warming was becoming ubiquitous in the kids’ Saturday morning cartoons or straight to DVD shows such as this one. Hanna-Barbera used agrrl rock band named the Hex Girls to bring up the issue of protecting the earth.

They called themselves “eco-Goths”, which seemed to mean that they were girls that liked to look like the undead and sing about how much they love the earth. And, as if to add some authenticity to the group, one member was Wiccan. I found it interesting that they treated Wicca as though it was an ethnicity, as in being Jewish, and not a religion, as in being Catholic. I may be wrong, but I don’t think Wicca can be considered an ethnicity.

But this was a minor annoyance.

What really bothered me was the fact that, at some point in the intervening 30 years, Hanna-Barbera thought it would be a good idea to drop the no supernatural policy as applied to Scooby Doo. And that’s what I was so disturbed by when watching ‘Scooby Doo! and the Witch’s Ghost.’ There was an actual ghost. My skeptic’s heart was broken.

Sure the first two thirds of the show held to the guys in costumes and other trickery angle, but act three went supernatural. A character who turned out to be a double-crossing villain found a book of spells and released the witch’s ghost from the limbo in which she had been imprisoned. It wasn’t smoke bombs and mirrors or any other tricks. Nope, it was magic. Actual magic!

There were lots of energy blasts, lightning bolts, explosions, yelling and screaming in a modified anime cartooning fashion. Trees became animated, as did pumpkins. People were lifted into the air and held in some sort of energy field. It was bedlam!

Finally, it took the pure of heart Wiccan girl to read the spell that would rid the world of the evil ghost and her henchman. (Not exactly) mystery solved.

When the show ended I felt that I had been insulted by Hanna-Barbera. I explained to my son how it was wrong for Scooby to have been promoting the supernatural after having shown that such mysteries always have a real world explanation. Scooby had taught kids that the supernatural, the paranormal, and the unexplained are merely mysteries that can be solved. But this version of Scooby Doo laid all that to waste.

I don’t have a problem with other shows and movies, for kids or adults, indulging in the supernatural fantasy. I am a fan of The X-Files, Jonny Quest, Harry Potter, Dracula, Frankenstein, haunted house movies, etc. Those shows never held that the supernatural was just unexplained natural phenomena (well, Scully tried). But when Scooby went supernatural, I felt so damned insulted.

Scooby Doo, how could you?!

Jim ‘Dr. Dim’ Fitzsimons lives in St. Paul, MN and works as an office manager for a janitorial service. He is a graphic artist, cartoonist, and portrait artist. He has a wife, Amy, and a ten year-old son, Hayden. Jim hosts his own internet radio program (Saturday nights at 11 Central) called Dimland Radio on the Z Talk Radio Network at http://ztalkradio.com/. Z Talk Radio is mainly a pro-paranormal station and Jim is their resident skeptic. You can view his online portfolio, buy stuff at his CafePress shop, and read his blog at www.dimland.com. Please like his Dimland Radio page on Facebook. It will make him smile.

One thought on “Scooby Doo, we love you… but not when you turn woo”