UFO and ROCK and ROLL!

Thank you Jim Fitzsimons!  I gave you an almost impossible assignment when I asked you to write about alien abduction and rock and roll.  I also have to admit I have not been able to finish the book mentioned here, but it is available on Amazon for anyone wanting that perfect holiday gift for your UFO believing rock and roll fan on your list.

It was a few months ago when my friend, Kitty, asked me if I had heard that A Flock Of Seagull’s one major hit, ‘I Ran (So Far Away),’ was about alien abduction. I hadn’t heard that, so I started to look into it and I ended up on a bit of a strange and difficult journey.

I must say the confirmation or refutation of the alien abduction notion wasn’t hard to run down, but I am going to make you wait for the answer. I’m a stinker that way

With my assignment handed to me, I started to search the internets to see what theGoogle could tell me about this whole one hit wonder/alien abduction connection thing, when a friend called to chat. I mentioned the task I was on and that got us talking about outer space musical themes. He asked if I had ever heard of Klaatu.

“Yeah. It’s from The Day The Earth Stood Still.’”

That was true, but my friend was referring to a Canadian prog rock band from the 70s. A band that was surrounded by rumors alleging they were The Beatles secretly reunited and recording under an assumed name. Seriously, people really thought this group was The Beatles. There’s a website that gives a listing of all the “clues” to the “true identity” of this mysterious band actually being the publicity shunning Fab Four. But they weren’t and, eventually, the members of Klaatu revealed their identities.

So, why bring up Klaatu? Apparently, they had a lot of songs about space. And one such song was their minor hit ‘Calling Occupants of Interplanetary Craft,’ a song that would later be covered by The Carpenters! The Carpenter’s version had even better charting success.I had never heard of the band Klaatu or the song (either version). That was a bit of pop culture I had missed out on.

An hour or so passed since I spoke with my friend about space and pop music, when he excitedly phoned back. He had gone to a thrift store (one of his hobbies) and he was passing the book section, when he spotted an intriguingly titled (and, believe me, that’s about all that is intriguing about it) book. It was titled – “Alien Rock: The Rock’n’Roll Extraterrestrial Connection.”

What a coincidence! He bought it for me on the spot!

This painful example of confirmation bias was written by UFO believer Michael C Luckman. For Kitty, and to be able to say I did it, I determined I was going to read the entire book. And, for crying out loud! How do book reviewers do it?!

I’m not the fastest reader in the world, but it really doesn’t help when you roll your eyes every couple of sentences. Rolling my eyes, shaking my head, face-palming, I’m telling you this book gave me quite a workout. All while simultaneously making me feel more stupider with each successive turn of the page.

Luckman lays out anecdote after anecdote after anecdote about rock stars seeing UFOS, believing in space alien visitation, and their own claims of themselves not being from this world. OUCH! The gullibility hurts. Luckman believes every claim. Face value! Rock stars wouldn’t lie or exaggerate or invent stories about themselves to enhance their image or possibly be mistaken. Nope, Luckman laps it up and doles it out for his readers.

Luckman has also come up with a convoluted way to describe the state of mind artists and writers call being “in the zone.” He calls it EMF – Extraterrestrial Musical Forces. The author believes that whenever a recording artist insists ignorance as to how they wrote a particular piece of music, when they claim the song seemed to write itself, that’s when the aliens are beaming the musical information directly into the artist. Sure, that seems plausible.

One sentence is all that’s really needed to sum up this book: Elvis believed in UFOs and that’s good enough for Michael C Luckman!

But I won’t leave at one sentence. I won’t let you off the hook that easily. 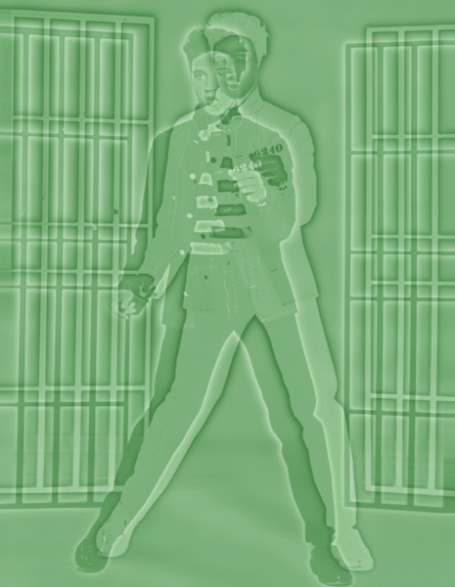 Luckman acknowledges that some readers might think that the drugs many of these artists imbibed in might have influenced their beliefs and experiences. But, the author assures us that is not the case, because…well, because he says so. Pretty much everything in the book is because of someone saying so. Although the book has a lengthy bibliography, there isn’t a single footnote or endnote to be found.

Published by Pocket Books, I wonder how much editing took place during the production of this work of credulity. What is referred to as the Introduction seems to me to actually be the first chapter. And the text is of a readable but unusual font. Also, the print tapers gently either to the top or bottom of each page. At first I thought some of the pages went out of plumb during the printing process, but it became clear that this was a choice and not a mistake. I’ve never seen a book published with that kind of text layout. Were they trying to be spacey?

I recommend that you pass on reading this book. I read it, so you don’t have to. You’re welcome.

One other thing about Michael C Luckman: He was a bit of a concert promoter and he had an ambition to put on a series of concerts around the world. The music performed would be beamed out into space to send messages to our extraterrestrial neighbors. That could be dangerous. Be careful who you book, Michael. Nickelback could lead to a full scale invasion. A galactic admonishment to turn that shit off.

However, the economic downturn seems to have dashed any plans for such communication with the aliens. The concerts have yet to be performed.

Speaking of alien invasion, I guess it’s time to let you know, dear reader, if ‘I Ran’ really was about alien abduction. It turns out that, yes, it is. I found that the entire 1982 self-titled album is a concept piece dealing with extraterrestrials coming to our planet.

‘I Ran’ is about a man being attracted to an auburn-haired, tawny-eyed girl just as she is being lifting into a beam of light. Frightened, but determined to stay with her, the song’s protagonist joins her in the abducting beam of light.

A couple interesting things I found out about A Flock of Seagulls while researching this piece. Mike Score, the writer and singer of ‘I Ran,’ absolutely hates the song. He only plays the song in concert because the fans like it. (And, probably, because he knows the fans wouldn’t show up if the band didn’t play it.) And A Flock of Seagulls is a Grammy Award winning group. Their song, also from this debut album, ‘D.N.A’ won the Grammy for Best Rock Instrumental Performance. (What?! No love for the Alan Parsons Project’s ‘Mammagamma?’) 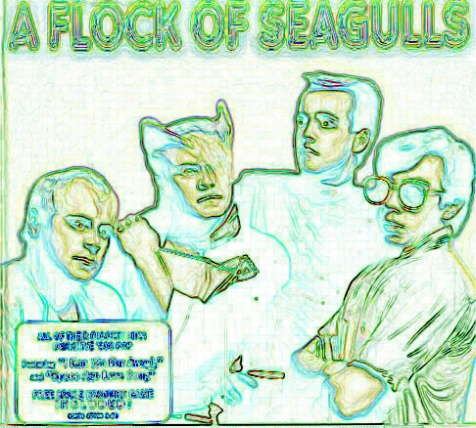 So, there you go. It’s true. The song is about alien abduction. And, strangely enough, there is no mention of A Flock of Seagulls or their one hit in “Alien Rock: The Rock’n’Roll Extraterrestrial Connection”. Go figure.

A Flock of Seagulls (band):
http://en.wikipedia.org/wiki/A_Flock_of_Seagulls#Grammy_Award

4 thoughts on “UFO and ROCK and ROLL!”