Z talk radio skeptic, on air skepticism amidst the woo

Jim Fitzsimons is a skeptic with a radio show on a paranormal site.  My own belief is that it is important for skeptics to interact as much as possible (without going insane) with believers in paranormal possibilities.  It can be a tough job, but Jim does it well.  Thanks Jim for a terrific guest post.

Call me a glutton for punishment, if you like. Why? Because, not only have I been listening to paranormal internet talk radio, for nearly four years now I’ve been hosting my own hour long, weekly show on the predominantly pro-paranormal network Z Talk Radio. On Z Talk you’ll find plenty of talk about psychics, spirit guides, energy, pseudoscience, bigfoot, ghosts and a myriad of other topics sure to make a skeptic’s head explode.  Or, at least sore from face palming.

There is my show, Dimland Radio (Saturday nights at 11 Central), which is 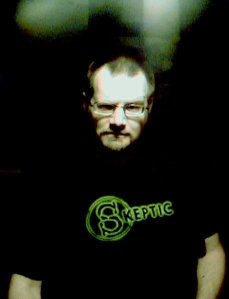 an attempt to bring some rational thinking to all the paranormal goings on. However, my show isn’t a full hour of my telling the believers that they are wrong and why. I look at my show a sort of an outreach to the believers. That my show gives believers a look at this one skeptic and what he’s like. I try not to harangue and I don’t even use the word “woo”. I talk about things that are on my mind and I often rant about my annoyance with pop culture and other little things.

I found Z Talk Radio back in late 2009, when it was called Dark Plains Radio. A long-time friend, Scott Roberts, was hosting a show and I thought I’d check it out. My friend Scott is deeply mired (he’d say involved) in the realm of the paranormal and he and I have had our go ’rounds on the various claims of the paranormal and what makes a good skeptic.

In my Dr. Dim guise I would hang out in Scott’s chat room to ask the skeptical questions of him, his guests, and other chat room folks. (An early favorite question of mine was to ask the guests to define energy.) Scott would assure folks that I was his friend and a skeptic, and that I was ok. Gradually the Z Talkers got to know me and, perhaps inevitably, someone (Scott maybe) suggested I do a show. I had been a guest on Scott’s show a couple of times and people thought I might do well.

I was reluctant at first, but some cajoling and my narcissism soon convinced me to give it a try. So, on March 13, 2010, Dimland Radio went on the air.

It didn’t take long for me to ruffle some feathers. It was my second show that got me in some hot water. I had been on another Z Talk program with one of the station’s resident psychics, when she started getting something from her spirit indicating something important happened to me when I was 32.  She kept asking me what had happened.  I, being a skeptic, didn’t play along.  I told her to tell me.

It sounded like cold reading to me and that’s what I talked about on my second show. Once the show had ended I discovered a firestorm taking place in the chat room. The “psychic” and her defenders were disgusted that I would suggest cold reading. “Dim, how could you attack her?” In my naivete, I thought I hadn’t, but I didn’t follow station policy. I was allowed to say what I wanted about psychics, unless they happened to be one of Z Talk’s psychics. I would have to allow them to defend themselves on my show.

Lesson learned. Apologies were made and the show is not available for download. But for the record and seeing as how the psychic is no longer affiliated with Z Talk, it sure seemed like she was cold reading to me. I certainly don’t think she’s psychic.

My listenership isn’t very sizable. As far as I can tell, I might have 10 or 12 listeners, at most, each week. I’ll have maybe two or three people in the chat room and I have no idea how many people download the show from the archive. Occasionally, someone shocks me when they tell me they’ve listened.

So, why am I not on iTunes? I could be. There’s no station policy preventing me from doing so, but I keep putting it off. It’s mainly due to laziness or procrastination, but another reason is that I’m afraid I’d lose the lone skeptic in a paranormal environment status and start preaching to the choir on iTunes. And yet maybe it’s because I’m afraid my show can’t live up to the quality of Skepticality, the SGU, the Geologic Podcast, Skeptoid and many others. I’ll just have to man up and take my small effort out on that limb and see what happens.

The folks at Z Talk Radio, the owners, show hosts, and listeners are kind, thoughtful, warm-hearted, intelligent, and sincere if mistaken about their ideas. And they allow this skeptic to blather on and on about whatever and to question their beliefs each week. I don’t expect to change their minds, but I am grateful for the opportunity.

One thought on “Z talk radio skeptic, on air skepticism amidst the woo”