The Bigfoot communities often become quite angry when skeptics point out there is no real evidence for the existence of Bigfoot.  The same goes for the UFO/alien community.  Proof is demanded by science.  However, believers point out there is plenty of proof. They point out the eye witness testimony of thousands of people that over the years that have seen a Bigfoot or UFO. 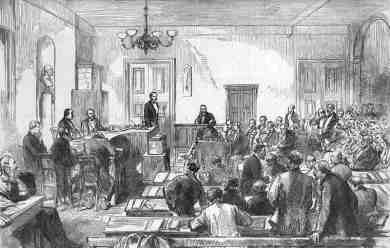 science is not decided by a jury

Believers point out that eye witness testimony is accepted in courts of law, even when the life of a defendant is at stake.  (Confusing I know!)

Science can also reject eye witness accounts, sometimes too readily.  It’s very difficult to convince some skeptics of anything you have seen that is out of the ordinary.   I found this out when Travis Roy and I saw a “Chupacabra“.  We never for a moment believed it WAS a chupacabra.  But endless skeptics told us we HAD seen a deer.  (No not a deer).  We had seen a dog. (No)  We had not seen it hopping.  (Yes it had hopped).  It was a great lesson for two skeptics on what it’s like for anyone that has seen something they don’t understand to deal with skeptics.  It can be quite frustrating because people would tell us what we had NOT seen, or what we HAD, but not really listen to us.

Many things live in the wild, that also like to cross roads.

James Epsy was as close to a professional meteorologist as existed in 1835.  He was interested in tornadoes.  His friend Professor Alexander Bache was also interested in the study of this little known weather phenomenon.  A tornado had touched down in New Jersey, near the town of New Brunswick, and Epsy and Bache came to look at the trail of the tornado.

Epsy had his theory. It was that the winds in a tornado moved upward in the funnel.  Everywhere he looked, he found proof for his theory.  Bache found himself disagreeing.  To him it seemed not that the winds had moved trees, laundry, homes and even a young victim upward and then down, but the debris seemed to suggest something else.  Bache saw a spiral pattern in the debris. 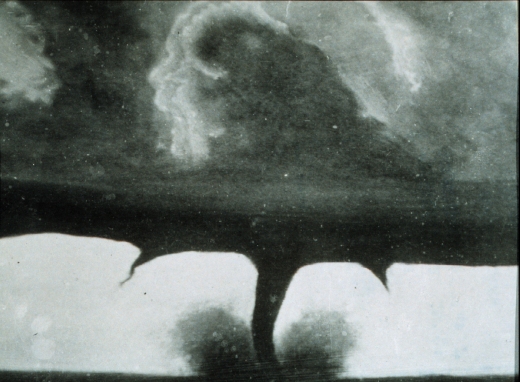 first photograph of a tornado, sadly as heavily retouched as many photographs of Bigfoot, aliens and ghosts.

There was also another problem, the eye witnesses. Most tornadoes were in very rural remote areas. This tornado had many eye witnesses as it was in a populated area.  They all agreed; the tornado had spun in a circular pattern.  In fact, the few previous descriptions of tornadoes had also mentioned the tornado rotated in a circular pattern.  Epsy, a true skeptic, did not believe in eye witness testimony and rejected the numerous witnesses.  Obviously a tornado is only seen for a short amount of time, and Epsy believed that the witnesses would be in a confused state.  His science, which he felt proved the upward pattern, had to be correct.

Epsy was so convincing, and also so tied to his theory, that he convinced Bache to change his mind about the circular rotation and agree with Epsy’s upward pattern belief.  Epsy was looking for proof of his theory, which to him was fact, rather than being open minded enough to view the debris evidence  with an open mind.

Science is self correcting, and no one today believes that tornadoes do not spin.  Eye witness testimony was correct in this case.  The reason we know tornadoes spin though is that they do spin.  Any number of scientists could claim they don’t, but one film of a tornado would convince them otherwise.

Scientists have been known to ignore evidence to keep a pet theory alive, but eventually new evidence pops up to disprove it.  Claims that scientists are suppressing evidence of Bigfoot or aliens because it would “upset their beliefs” are wrong.  What is needed is other kinds of evidence to back up eye witness testimony.

The UFO community is sadly awaiting new evidence.  Old cases are brought up again and again as the “best evidence.”  Also the Loch Ness Monster hasn’t put in an appearance in a long time.  What is needed is something besides eye witness testimony and perhaps scientists and skeptics that are a little more tactful to eye witnesses!  You never know; they could in the end be proven right.