There have been many recent cases of major mistakes by so called psychics who claimed to help police and families of missing children.  Psychics have told despairing families that their children are dead, when they are actually still alive.  The anguish caused by these “guesses” is immeasurable (even psychics admit they are never 100% right, only you would never know it hear them on television).

This is sadly nothing new.  A recent book “we is got him” by Carrie Hagen, covers the “Kidnapping that Changed America”.  In 1874, little Charlie Ross was kidnapped from his front  yard in the Philadelphia area.  The kidnappers demanded $20,000 in ransom.  This is considered the first modern style kidnapping in America.  Sadly, while it was felt that the kidnappers were arrested and 2 of them were killed during a robbery, Charlie Ross was never recovered.

The kidnapping made news all across the United States

The parents and family of Charlie Ross suffered the despair any family would at losing a child.  The mother, Sarah Ross, suffered greatly, especially as the notes showed that for a long while her son was still alive.  The notes mentioned things such as Charlie wanting to go to on a planned trip, and also a health problem he was known to have.

The Ross family had to deal with letters delivered to their home, with clues or promises that they could help find the missing child.  Some of these were from fortune tellers, and if only the Ross family would turn to them, they could help.  Even today when a child goes missing, families are inundated with offers from self proclaimed psychics and fortune tellers offering help.  Many offer help for a price, or offer help for reasons of self promotion.  No psychic has ever been instrumental in finding a lost child.  Ever.  But the pain for the families, wondering if any of these psychics are real or could possibly help find their child, must be overwhelming. 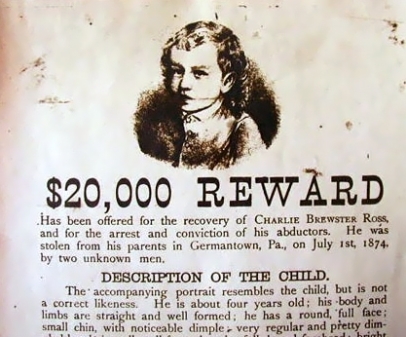 Religious fundamentalists visited the Ross home.  They claimed that the father’s practice of trimming his beard caused God to allow Charley to be kidnapped.  This was guilt, but at least the fundamentalists did not offer the false hope the fortune tellers did.

Charlie Ross’s mother Sarah consulted spiritualists, and the police had to take some of the advice they offered her seriously.  This is still a problem today, if a psychic or spiritualist offers advice “the body is near water”, or “the child is held in a blue house on West street” these leads must be followed up.  Sadly, this can waste time better spent on doing real detective work, rather than checking up yet another imaged lead.

One letter from a medium made the father Christian leave his sick bed, to visit the medium in person.  Christian Ross took a detective with him to visit New York where the medium lived.

Sadly, after speaking to the medium, the father and detective returned home, knowing this medium knew nothing that would be of any help.  The parents were advised via letters to use witchcraft to help find their missing child, directions including killing a chicken.  Christian Ross found most of the information offered in these letters from mediums were simply retelling information easily available from newspapers.

In the end, Charlie Ross never came home.  His parents lived the rest of their life having to deal with people that claimed to be their son Charlie, and the knowledge they would never know if their son was truly alive or dead.  The case predated that of America’s most famous child kidnapping that of the son of Charles Lindbergh.  Psychics, mediums and spiritualists all offered their “expertise” with that kidnapping, and were as wrong as they were in the Ross case and all other cases.  Unless there is a lucky guess, or vague enough a guess, these so called people with paranormal abilities are never right.  What they are is a waste of time and an emotional drain on a family in crisis.

A wonderful helpful group for any family that has a missing child or family member is Project Jason. http://projectjason.org/

They offer true help, not false hope, and help families deal with the flood of offers from people claiming paranormal powers to find their child.  Project Jason is run by people that know what a family with someone missing is going through, as many of them have been through the same experience themselves.  Project Jason is the kind of help these families need, rather than the exploitation the psychics and scam artists offer.

Another… Skeptic Blog about Rape »
« Paranormal Skeptic? What are the odds?