Chinese New Year Nightmare, when a mouse finds out she is a pig!

I am a skeptic that thinks astrology is a big joke.  However, before I was a skeptic, I was never allowed to read my horoscope as it was considered a “bad thing” by my religious grandmother.  She didn’t think a horoscope was satanic or anti-Christian.  She just felt putting faith in a blurb in the newspaper was wrong.  The idea I would change what I was going to do during the day based on something written by “just anyone!” was not encouraged.

Other children knew their “sign”, and I eventually figured out I was a Pisces.  While I was fond of being ON the water, I especially love boats, I have never been a fan of being IN the water.  I’m still a very poor swimmer.  That I was a water sign was one strike against astrology.

The second strike was that Susan Schultz was born the exact same day I was.  We were friends but not close friends.  She played the viola.  She was athletic (she loved to swim), she was tall and blonde and good at languages.  I was not athletic, I tripped a lot.  I was brunette and struggled to get a B- in French class.  I could draw well though, but wasn’t a fan of music.  She was also a leader.  In any group activity she would take charge.  I am a natural born follower.  I’m up for anything, and glad to let other people make the decisions.

We once compared notes and found we were born in the same hospital within 2 hours of each other.  We both agreed, astrology, if not a total scam, was very flawed.

My own children were raised without any mention of horoscopes or astrology.  I should say I did mention astrology but only in the most negative terms.  I honestly could not tell you the “sign” of each of my children.  I have no interest and would have to look it up.

My own children though took a different view.  While they disliked regular  astrology, they did discover and like the Chinese Zodiac.  Who hasn’t sat waiting for their Chinese food and read the place mats that cover the table?  What animal are you?  My children really loved the Chinese Zodiac.  They knew their signs and were proud of the animals they were.

be careful of the year!

Then one day, when my daughter was in high school, she was telling someone that she was a Rat.  The person asked “But isn’t your birthday in early January?”  It’s true the mats at most Chinese restaurants just say the year, and what animal you are.  However, the Chinese New Year does not start on Jan.1

My daughter Evelyn found out she is a PIG.

All the cute Asian style mice and rats were no longer applicable to her.  The pig collectibles were, well, swinish.  Evelyn’s younger sister, Aynsley the horse, got a good laugh out of it.

So, never trust the mat at the Chinese restaurant for your Chinese Zodiac sign.  Especially if you were born early in the year!  If you have a little sister that thinks oinking at you is hilarious, you might just want to forget about it all together. 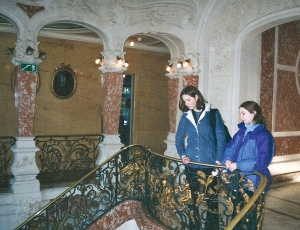 One a horse and the other a pig… I love them anyway.

4 thoughts on “Chinese New Year Nightmare, when a mouse finds out she is a pig!”