I highly recommend reading Ben Radford’s book “Tracking the Chupacabra”.  It is one of the “skeptic” books that a non-skeptic can truly enjoy.  A modern mystery of how a creature, never heard of before, can suddenly pop into modern mythology.  Everyone today knows what a “Chupacabra” is but, as early as 1990, no one did.

Puerto Rico, an island more developed than you think

Navy Base, the Seabees are ready for chupacabra hunting

The chupacabra was “born” on the lush island of Puerto Rico.  The rise of this creature, during the 1990’s coincided with yearly vacations I took with my young daughters to that island every winter.  Our family would stay anywhere from a week to 2 weeks, enjoying a break from the bitter cold of Wisconsin, and later New Hampshire.

So, since we went every year for over 10 years, obviously we heard all about the chupacabra?  Well, not exactly. We had many friends that worked at the Navy Lodge where we stayed.  We made friends with the locals in nearby towns that owned and worked in the restaurants where we ate.  We especially enjoyed seeing the national park employees at El Yunque, the rain forest, year after year.  My daughters would bombard the rangers with questions and they came to look forward to our yearly “invasion”.

The whole family loved El Yunque.  It was a tradition to celebrate my birthday there.  Puerto Rican families did not see it as some exotic tourist site.  Instead, they would often picnic there, and have parties in one of the small covered pavilion areas.  The tourists would be in hiking gear, looking ready to star in their own adventure movie. The locals would wear dresses and sandals,  and they carried cakes, food and beer.

I would always joke the only reason I agreed to go to El Yunque was that there were no poisonous snakes.  I had been raised on Tarzan movies, and had a fear of a snake dropping out of a tree on me.  The park service employees assured me that El Yunque was very safe as long as I stayed on the trails. 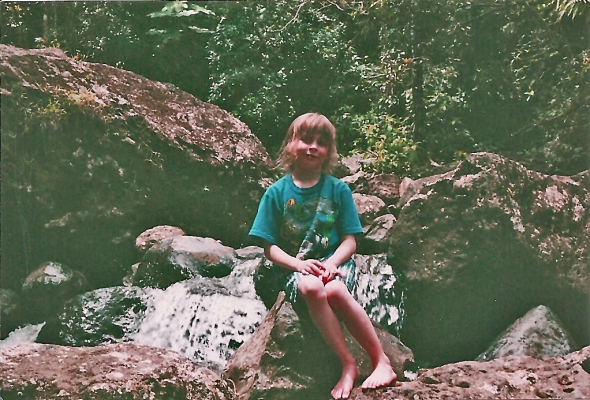 As the years passed there were warnings that went up.  Not for a chupacabra though.  The mongoose was introduced into the area to help with the control of rats.  Sugar is a very important product of many of the islands in the area, and rats damage sugar crops.  Sadly the mongoose soon become a pest instead of a help,  as the mongoose became a carrier of rabies.  Signs and warnings began to appear, especially in El Yunque.

Our family first saw mongoose when we were driving inside the Navy base.  We had never seen one before, and had not a clue what this long slinky squirrel like animal was.  My youngest christened it the “Lizardo Squirrel!”.  When we explained to our local friends what we had seen they were “You have to keep away!  They are very dangerous!”.   A Rabid Mongoose is indeed far more dangerous than any chupacabra.

Feral dogs also proved to be a problem. The dogs are for the most part afraid of people. If you shout, the dog pack will usually run away.  My one daughter was very young, so I was advised to keep her by my side at all times.  The dogs are known for attacking unattended goats and chickens.  Large packs of hungry dogs, which seemed to be everywhere, certainly must account for many supposed chupacabra attacks.

Rabid mongoose and feral dogs are real dangers of Puerto Rico.  Chupacabras are not.  I asked everyone about chupacabras when I first began to hear about them back home in New Hampshire.  Everyone ,from National Park employees to our favorite waitress, wondered at how rapidly the chupacabra story had spread beyond the island.

Part of the Navy Base, the lush growth was part of the protection

The Navy Base, Roosevelt Roads, was very lush and natural.  A wide band of dense jungle surrounded the base as a natural protection from attack.  You traveled on the roads on the base, off road the vegetation was so dense you could not even begin to walk through it.  Around the base however, the area had been flattened to build condos and vacation hotels.  Unbridled growth, and poorly built vacation homes and hotels, were a serious problem.  There simply are not a lot of wild areas in the North East area of the island.

We were surprised at how much of the island was not only developed, but over developed.  El Yunque and the Navy Base, were the only truly undeveloped areas we saw, and we were very familiar with over half of the island.

The question always brought up, how could the chupacabra appear seemingly out of nowhere?  The only person I ever met while in Puerto Rico that truly believed in the chupacabra was Jose, who owned our favorite little coffee shop. He believed the chupacabra had been developed at a secret military base on the southern part of the island.

I decided we would find this base.  Since my husband was then in the Navy Reserves, we looked up all the military bases on the island.  We thought our best bets for a “secret lab” producing chupacabras were Camp Santiago or the Fort Allen Naval Radio Station.  We took off down the East Coast toward Ponce in the South.

The island begins to get less green as you travel south.

We had a wonderful drive along the coast, and even drove by the Life Saver factory.  My youngest, a Star Wars fan, was sure I had said “Light Saber factory” and cried that we would not stop.  After we figured out she didn’t want candy, she wanted a weapon, we were able to continue our search for the birthplace of the chupacabra.

Camp Santiago seemed like a good bet.  Puerto Rico has an interesting  weather pattern.  The north part of the island is lush and green.  The south part is quite dry and in places like a desert.  The mountains are barren, and the poor chupacabra would have to hide under taco carts and scrub.  Camp Santiago seemed alright, but just didn’t seem right for a “secret lab”.

Our next guess was the  Allen Naval Radio station.  We drove up to a gate with some old abandoned playground swings, and overgrowth and scrub everywhere. The back gate was rusted, locked, and deserted.  It seemed to be more a setting for a Stephen King novel than a military compound.  Our bet for the birthplace of the chupacabra, the deep cover of the Allen Naval Radio Station.

Later I heard that the chupacabra might be some alien/dog hybrid, and that the aliens had been attracted to Puerto Rico because of the Arecibo Observatory on the island.

If nothing else, while the chupacabra story flourished across the world, our friends in Puerto Rico stayed skeptical.  People saw a lot of wild dogs and wild mongoose, but no chupacabra.  Puerto Rico is a beautiful island, but I have been assured it lacks both poisonous snakes, and chupacabra.

The only way to stay safe on Puerto Rico, stop here!

Bird + Imagination = Mystery! »
« Have a Happy whatever makes you happy this time of year! (and the war on Christmas escalates! Jesus missing!)

One thought on “Puerto Rico, Chupacabras, and our family investigates!”