There is a lot of debate in the Big Foot and skeptic communities about shooting Big Foot. Crytozoologists, hunting for Big Foot, often don’t like to be lumped into the “paranormal” pile. They feel Big Foot is a creature just waiting to be found. 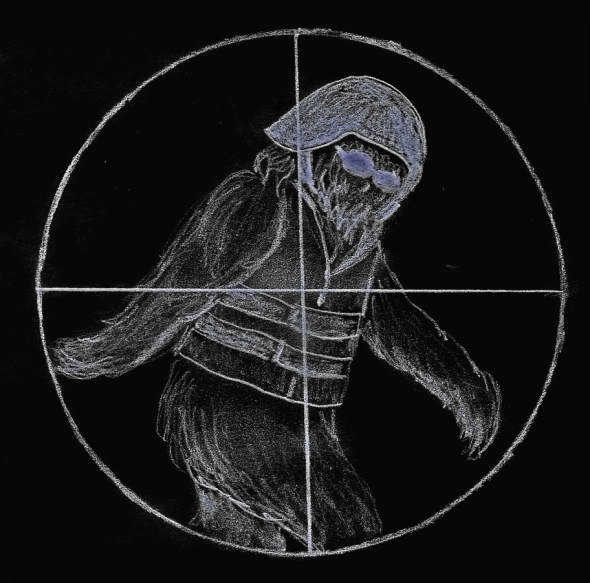 Body armor might be a good plan for Big Foot

I should note that Big Foot hunters tend to believe in Big Foot, they aren’t searching for something they don’t believe exists. They site evidence, that for them, is enough to convince them there are communities of Big Foot living in almost every state in the US. What is to be found yet, is proof that will convince skeptics like myself. That’s why I have been, in the past,very much in favor of shooting Big Foot. When Big Foot proponents ask me, “What would it take to convince you?” I answer “A corpse.”

Historically, a corpse is what it has taken for a mysterious animal to be accepted by science. When the first Platypus showed up in England scientists searched for signs of stitching. It had to have been cobbled together! No stitches meant the animal was real.

The reason I no longer propose shooting Big Foot is I fear the Big Foot corpse I drag in would have not only stitches, but also a zipper.

Let’s take the gorilla, an animal often sited by Big Foot hunters in the hope that there are still large primates to be found. It was not known, world wide, until fairly recently in history. I like to think that the people living near gorillas knew all about them. They are just new to Western culture. The first report by non Africans about the gorilla appeared in 1847 in the “Proceedings of the Boston Society of Natural History” in an article by Thomas Savage and Jeffries Wyman.

Still, it wasn’t until a dead specimen was brought to the UK by Paul du Chaillu in 1861, that they all doubt about this animals was gone. As I often tell Big Foot hunters “You have all this bad evidence, foot prints, sightings, vague photographs and footage, yet just one bit of good evidence would convince the world.” The biggest pile of foot prints can never equal just one body, or even one strand of DNA.

Science has progressed to the point where we don’t even need a dead Big Foot. A bone, a bit of hair, or some Big Foot scat would do. That’s all it would take.

There is also no reason to “cover up” Big Foot. I can understand, if only briefly, a government conspiracy to cover up advanced alien technology. I can understand why someone might think a perpetual motion machine would be suppressed by the oil companies. I even for a moment can entertain the idea of “big pharma” covering up miracle cures. But why anyone would want to cover up evidence of Big Foot evades me as much as Big Foot has evaded his hunters. Big Foot is just simply proving very hard to find.

Since Big Foot has proven so elusive, I was for many years an advocate of “Shoot!”. Big Foot hunters can be very passionate about their belief. I am open minded. It’s sometimes hard to convince the Big Foot crowd skeptics would love for them to exist. How exciting, to find a living creature so large, so elusive, and also so gentle. No one has brought in anyone purported to have been killed by a Big Foot. Their tolerance for humans, especially those on reality TV shows, is alone worth study. I would love proof of Big Foot, dead or alive. Dead seemed to be the only real choice for hunters of an animal that seems to simply disappear after a brief sighting.

That is until I discovered how many people like to engage in Big Foot hoaxes. Randy Lee Tenley was hit by two cars and killed while wearing a camouflage hunting suit, he was pretending to be Big Foot. I watched one monster hunter type show where the native “guide” points out to the camera crew a disturbance on a nearby mountain. No one noticed but the “guide” who with his superior eyesight knew just where to look (and when) for the distant large creature. The creature was too far away for the crew to catch whatever it was or to get a clear view. I thought “If I had a high power rifle I could take that baby down!”

That’s the problem. I could, and probably would, have killed a friend of the guide. A friend simply trying to give the camera crew of a television show some nice footage.

I recently joked about making my own Big Foot hoax in front of my neighbors trail camera. My skeptic friends talked me out of it, simply out of fear I would be shot. It didn’t matter how comical I planned to make the costume, they figured Big Foot is fair game.

I would still shoot Big Foot, but only if I knew it was a Big Foot. Sadly, ones best chance would be not a close up shot, but one from afar. Big Foot is nothing if not a shy creature. Unless I could be 100% positive it was not a costume, and some costumes are pretty darn good, I think I’ll pass on the chance to make history. Though if someone else shot a Big Foot, and it isn’t cousin Elmer dressed up and just having some fun, I’ll be as thrilled as everyone else such a creature has been proven real.

Meanwhile, enjoy the Big Foot that visited my daughter’s birthday party. (Yes, she was a big fan of re runs of the TV show “Alf”, so I supposed we could say this was a Big Foot/Alien!) This Big Foot was lucky the neighbors are peaceful, and it wasn’t hunting season.